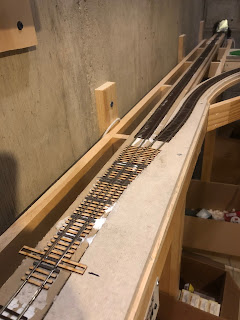 I'm sure some of you are thinking, "It's just a turnout in the furnace room. What's the big deal?"
Well the big deal is that this is the turnout for the Pinedale branch and the last bit of of track and benchwork required for this layout.
I took the time on the weekend and built the last bits of benchwork for this branch. 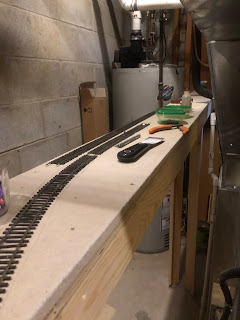 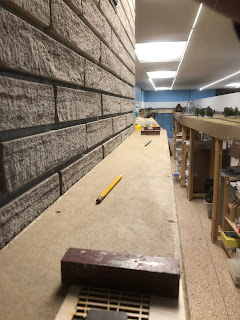 We have this bit of narrow benchwork before we got to the actual peninsula. 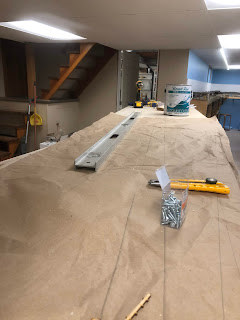 On this peninsula will be an important customer on the branch, The California Cotton CO-OP  better known as CAL-COT. From what I've been able to determine large amounts of baled cotton was shipped out of this facility.
And it was quite a large facility in it's day, as can be seen in this wartime era photo; 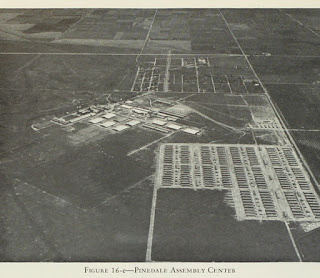 The CAL-COT buildings are the ones at an angle to the camera. As a matter of historical interest, the buildings closest to the camera are barracks. Built as temporary holding facilities for Japanese Americans before they were shipped inland to internment camps.
I've been very fortunate in getting a large number of photos of the buildings from a Jeff Johnston is is modeling the same buildings in a different era. Early in the 20th century the buildings were built to be the sawmills for  Sugar Pine Lumber Co.
Here's a view of the exterior of the planing mill; 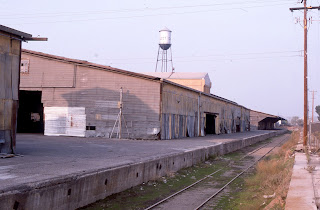 Big, long, sprawling buildings.
And here's another fun fact I was recently told.
One of these buildings was the first home of Cal-Scale. Cool, no?

Now all I need is half a sheet of Homasote, however due to Covid 19 , the supplier is closed for the duration.

For the forseeable future

Just a quick note to all out there in Model Railroad land.

The mail continues to move across the US/Canada border unimpeded.
While I'm not going into the post office as much as I may have in the past, I am still fulfilling all orders that come to me via the website or by mail.
I'm restricting my trips to once a week for now

Now is a great time to be building those models you've not had time to.

We're all in this together, and it will get better
No comments:

The current major project on the bench right now is 8 coaches and head end cars for the Milwaukee Road.
They are a mix of older Branchline kits and NKP  Car Co kits.
The paint scheme is rather striking. Brown roof, orange sides with a vermilion band across the top of the sides. Something like this;

2 of the cars are actually sleepers and those particular cars, the window sashes were brass on the exterior. All of which makes for a bit of a challenge for masking.
So yesterday I set myself down to tackle what I expected to be a rather tedious task. Masking 74 windows. I grabbed the roll of 10 mm wide Tamiya masking tape and TA DA, the windows are mostly 10 mm high. The gods were smiling upon me for sure 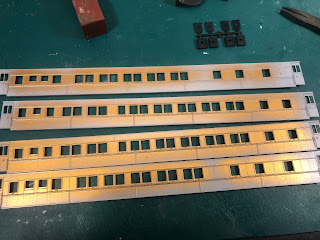 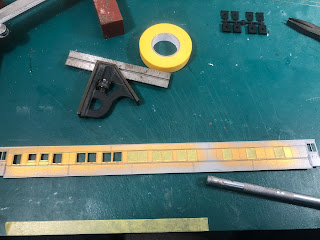 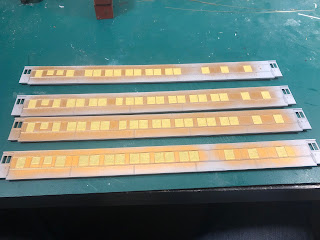 Not having to cut the tape to the correct height saved a considerable amount of time, the whole job took less than 2 hours to complete.
The vermilion is now applied and curing, orange in a couple of days

I don`t know about you, but I've had my fill of living the Chinese curse, "May you live in interesting times!".

First the good news. We're all healthy and safe here. To date there are no cases of infection in this small South Western Ontario city, but the road out front sure is quiet these days.
I'm spending my days in the basement working on various projects, with the main effort being a string of Milwaukee Road coaches for a client, once they're out of the way various freight car builds await my attention.
Might even get caught up with custom building projects if this goes on into the late summer.

Now the "bad" news.
There's a really strong likelihood that my supply chain will get interrupted.
The USA- Canada border is being closed to non-essential traffic today. As far as I know this will not affect the mail or other commercial traffic. So I will still be filling orders for kits and parts as long as inventory is able.
My caster is unaffected, and there's a reasonable supply of detail parts and decals. The problem may come from the parts that are etched in Germany and decals printed in Italy.
The upcoming release of the D&RGW PSC built cars may be affected if I can't get etched running boards. However , right now I am moving forward, hoping for the best, but preparing for the worst.

So in the meantime, stay safe, find some fun projects to immerse yourself in at home, and above all else, STAY HOME. Please.
3 comments:

A sneak peak for you

Here's a peak at what we've been working on at Yarmouth Model Works this winter. 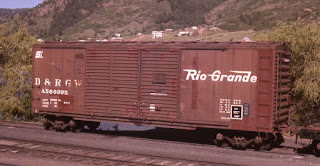 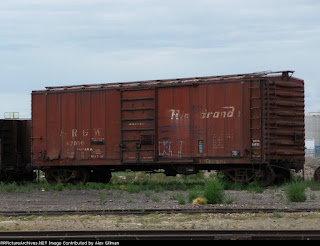 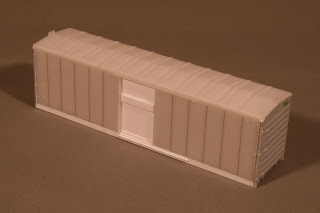 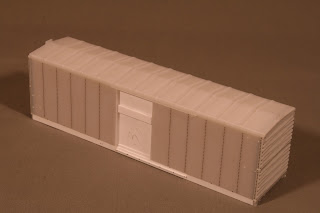 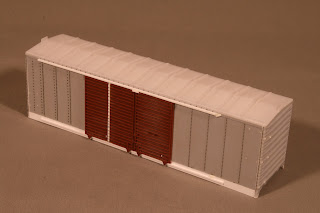 Shown here are the 3 body masters,
6' door with 4/5 ends
6' door with 3/4 IDE ends
and of course the iconic 15' door variant.
The 6' door kits will be offered with a choice of Apex Tri-Lock, Gypsum or Morton running boards. All of our etched running boards are being redone this spring to correct some minor errors we've discovered and it will be the corrected running boards that will be included.
The 6' door cars will have the choice of either Youngstown or Superior doors. 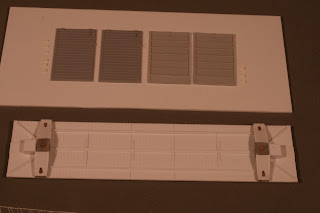 And we're really excited to announce that we will have created an all new set of Duryea underframe parts. 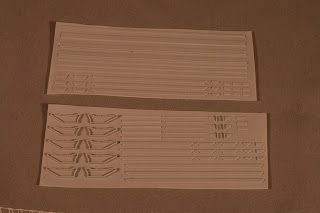 In conjunction the etched details  currently in production for the underframe, we believe that this will be nicest Duryea underframe yet seen in the resin kit world.
And as usual the kit will include our etched ladders and other details as you would expect from us.
Speedwitch Media is working on the decals for us. And we will be offering the as built scheme, as well as the famous "Cookie Box" scheme. 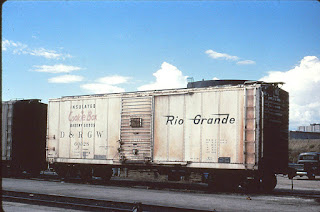 We are hoping for a mid-summer release date, price is yet to be determined.
If the stars align as they should, I hope to have these for the St Louis RPM.

And don't just take my word for it!

Hear what others are saying about the fun of banging cars around on the Clovis Branch
http://themodelrailwayshow.com/LayoutDesign/?p=4057&fbclid=IwAR2ZG1cT4jIrJ6AU8Yr104SKtpgG0MmjcoyR38H9kMhhviTmembndPGgfJQ 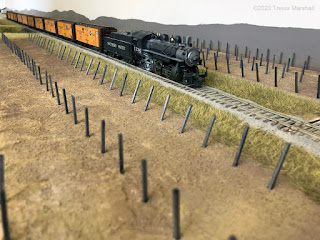 So a couple of days later, but who's counting?
Jan 4, 2020, I had 4 friends come over to run the layout in it's fullness. At least as full as it is right now. There is still the Pinedale branch to build, likely this summer.
The plan was to run 2 trains, the regular daily way freight and a reefer block extra.
Gerry, Robin(AKA Mr Murder), Trevor and Stephan all had accepted the invite, so I got to sit back and observe and revel in their joy of running the layout. And the layout performed brilliantly. The operating concept was proven to be a solid one. I foresee many years of operating pleasure out of this layout.
And while it is now in full running mode, there is still much to be done. Many more structures to build as well as orchards and vineyards. But with it now running I can ease back a touch and enjoy the efforts of the last 2 years.
Stephan has posted a few short videos on Youtube 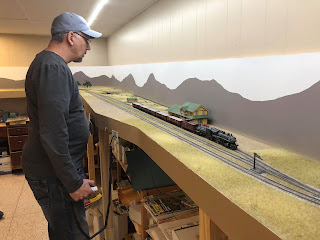 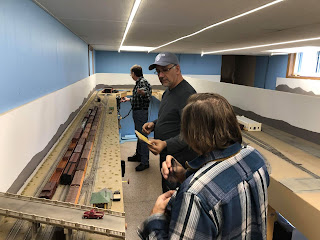 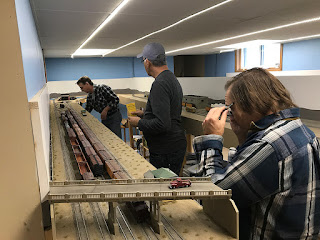 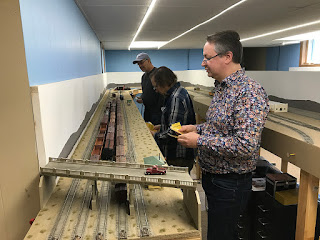 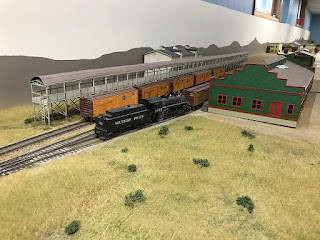 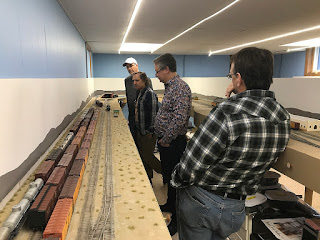 It's been a very long time since I've had an operating layout, and I'm so pleased with this concept and design. Thanks so much to Trevor for dropping this idea into my lap and thanks to the guys for coming out and bringing the dream to life.