Progress and some old friends 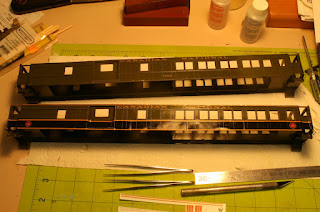 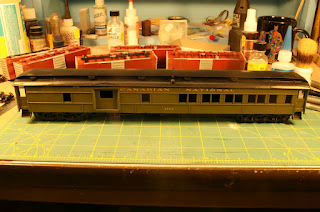 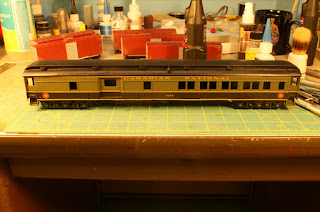 As you can see much progress on the CNR S scale combines for my friend Trevor Marshall. Decals being applied to the second side of both cars. It was decided to paint the cars in both the early style and the post 1954 scheme, allowing Trevor to shift the timeline on his layout as the mood struck him. At least that's what he says. I think he wanted the post 54 scheme just to make me crazy. Stripes are not my favorite thing. I suspect that he's punishing me for some unspoken crime.

While the setting solution drys I embarked on other projects. 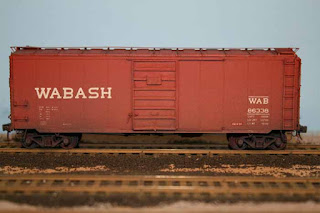 There are times when my clients needs and mine sync up. In this case a client had sent me a couple of older Speedwitch Media Wabash kits to build for him. The KC105 "kitbash in a box" recreates the 2,400 1942 AAR cars built for the Wabash. The kit contains an undecorated Branchline Trains boxcar kit (remember kits?) and all the extras needed to build a contest quality model of these cars.
Resin castings of correct ends, doors, side sills, cut lever bracket, brake step supports and Miner Power handbrake are provided along with a Tichy AB brake set, wire grabs, etc. ANd lets not forget the awesome decal sheet. When I reviewed this kit for Railroad Model Craftsman I couldn't say enough about this and my opinion remains unchanged. The whole kitbash in a box concept remains one of the smartest things Ted did, in my opinion.
So I'm taking advantage of the need to build a couple of these cars for clients and building a few more for myself. 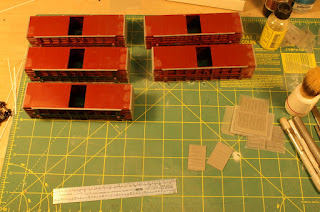 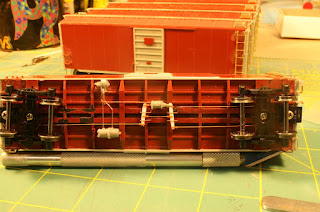 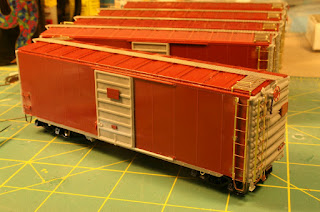 I should also take a minute and talk about Springfield. I attended the show with a display of my work and was delighted to meet a great many people that I had only known by name and/or reputation before. While the 8 hour drive was somewhat taxing, the end result was more than worth it. I expect to return again next year, if for no other reason than the annual meeting of the "Dead Railway Society".