Part of the fallout from Sunday's "Sea Trial" was uncovering a few gremlins in the layout that needed addressing. To be expected.
A few of the gaps in the staging yards had closed up with the seasonal building shift. Some of the actuator pins for the turnouts were a tad long and fouled the underside of the SW-8 trucks. There was a broken connection on one of the power switches for the staging yard. ( I have a switch for each of the staging tracks so I can power down unneeded units).
And I had 2 turnouts that required serious attention as a result of a failure to properly secure the stock rails when they were built. Threw a few things out of gauge.
After addressing those issues today, I was feeling a tad emboldened. So I pulled out "The Daily Effort". That is the Hamilton originated mixed that traverses the Cayuga Sub from Jarvis to Simcoe while on it's way to Port Rowan and Port Dover. In the era I'm choosing to model that train was headed by a CNR Mogul.
First problem arose trying to cross Highway #6 in Jarvis. The Mogul kept stalling. A very close inspection revealed that the planking I had used for the level crossing was a tad higher than the rail, which prevented the Bright Boy from cleaning the rails properly. So out the planks came. 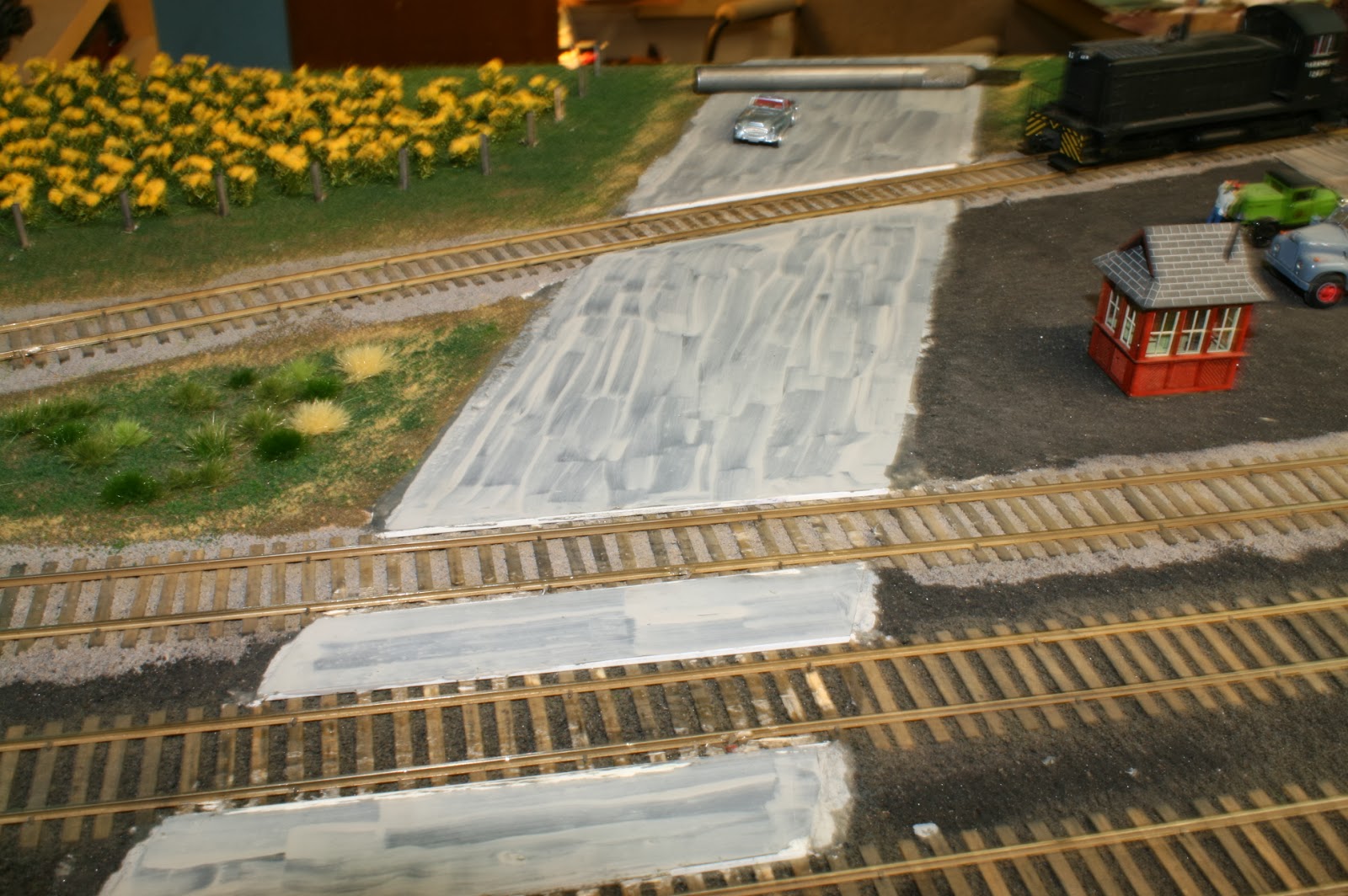 I'll try again with 4 x 12 stock after I finish experimenting with painting the road. What you see here is a failed attempt to brush paint with acrylics. I'll be airbrushing this later.
With that out of the way, the train ran very nicely along the main until we entered the helix. When things stopped. After 1/2 an hour of poking and prodding I determined that I was having an intermittent short on the Mogul. 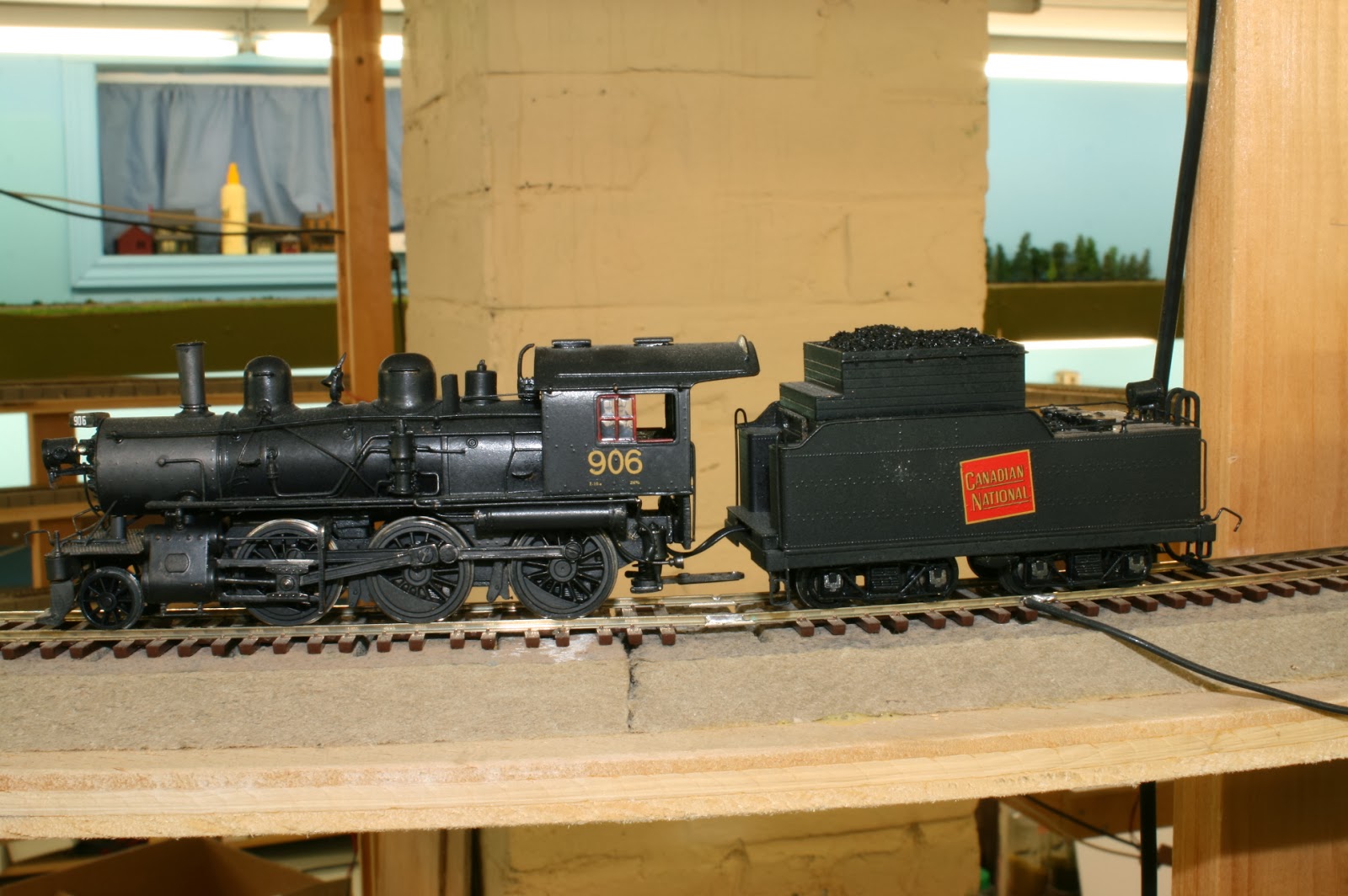 Oh Goodie, I thought. Nothing like trying to chase down an intermittent short in a brass model. First place I looked was the drawbar. The insulators are notorious for failing and causing no end of issues. So I dismantled the engine, no small feat as there is a hardwired decoder in the tender. and checked the drawbar. Changed one washer just to be safe, put back together, back on the rails and no joy!
Grrr.
Back to the bench, into the foam cradle and out comes the meter. Poking, shoving, twisting, then suddenly a short. Do it again. Takes 5 minutes to repeat the effect.
Are you kidding me?! As it turns out the helix is exactly the right radius to cause the rear tender wheel to short against the brake cylinder. And only if it's turning to the right.
The brake cylinder is now residing in it's new permanent home in the trash, and the Mogul runs like a dream.
Trains are Stupid!

Wow. All of this grief is striking fear into my heart. Do I really want to build a layout? :0)

Good to hear that you sorted it out though. Any idea how long before you try doing a full operating session?

Right now I'm looking at the latter half of March.