We don't store spare tubes above the ceiling tiles. 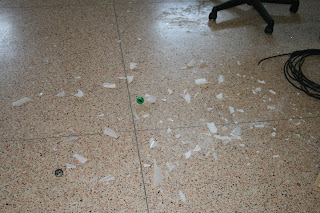 Another little treat left to me by the previous owners. Spare florescent tubes stored above the drop ceiling tiles.
I was in the process of upgrading all the fixtures to new, efficient T8 tubes and replacing the 50 year old ceiling tiles. While removing an old tile, I was awarded with the singular sound of a tube rolling and it made it to the floor.
More annoying then anything else, but why do people do this stuff? It's plain dumb.
At any rate the ceiling and lighting fixture job is the first step in room prep for the upcoming layout.
All the fixtures will be replaced with new T8s and all the tiles will be replaced as well. Many tiles were damaged by darts, kids, pool cues, etc. A couple of extra fixtures need to be added to even out the lighting in what will be the layout space.
As it turns out it's good thing I decided to address the fixtures. The existing fixtures are not original, but appear to have been upgraded in the '70s.
I say the '70's because many of the fixtures are connected to octagon boxes using armoured BX cable that is in fact aluminum conductors. Copper and aluminum, as we know now, should never mix. Fires can happen. So I'll be taking advantage of this opportunity to make things a tad safer.
Good thing the insurance company doesn't know about this. Shhhhhhh.