As I mentioned in my previous post, I'm having issues with power routing to the frogs on the layout.
I use Fast Tracks Bullfrogs for turnout control. They feature a micro-switch for power routing to the frog. After the first 'Sea Trial" I went around the layout and carefully tweaked any turnout controls that weren't behaving properly. Sometimes the micro-switch needed a tad of adjustment to "click" over to the other route. But on Thursday last I had a number of turnouts that were not working properly. The micro-switches were out of "trim" again.
This mis-alignment was discovered when a unit would attempt cross a frog and short out due to incorrect polarity at the frog.
Occasional shorts on a layout may not seem like a big deal for some, but when running multiple units with sound decoders, restart can be an issue. On my layout, more often than not there are 4 or more sound equipped F7s occupying a power district. Under normal running conditions 5 amps is plenty of current, but if a short is created the breaker trips and when it tries to recover the inrush current for the sound modules easily exceeds the breaker capacity. Requiring that units be tilted to get them off the rails to allow the breaker to recover.
I gave this a great deal of thought for the next couple of days and discussed the issue with my guest.
Here's what I suspect. My basement, which is in a 110 year old house, is not the most stable environment in terms of heat and humidity, and with the winter like we just had, both the walls and the floor move some. Which can easily through many things out of alignment. I suspect then that keeping the Bullfrogs "trimmed" will be an ongoing issue. Which I'm not prepared to continue struggling with.
Solution.
Tam Valley Hex Frog Juicers 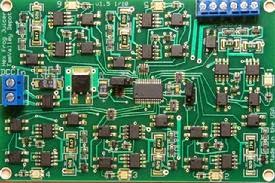 This little baby is a brilliant solution to my problem. It maybe a little like using a sledgehammer to crack an egg to some, but for me, if I can stop fussing under the layout with linkages, etc, the happier I am. These units are available for 6, 2 and single frog control.
I should have these in hand next week and will certainly have them installed by Sept. They are dead easy to wire. 2 leads to the track bus and a single wire to the switch frog. The unit senses and automatically maintains the correct polarity for the frog/s in question.
The funny thing is that I first considered using these all over the layout when I bought the first 2 of these I have for the staging yards. Should have listened to my instincts back then.
Happy Canada y'all!