Well now that they're out of the way,

Benchwork can resume.
We're getting a new kitchen, which involved some electrical and gas line work. Which prevented me from building any more benchwork until that work was done. Now that the contractors are out of the way regularly scheduled programs on back on track. 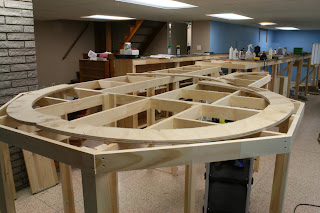 This bit represents the east end of St Thomas, out as far as the CPR interchange. The prototype is dead straight, but I have no choice but to make the whole thing turn as you can see. Basement just isn't long enough.
The view block that will be created by the backdrop will help reinforce the sense of distance from the station to the interchange. Tricky things to convey in model railroad context.
You can see on the right the crossover which will be interchange track and the end of the double track yard limit.
This is the scene I hope to jam in at the crossover. 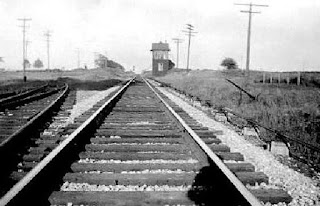 Now to fiddle a bit with the actual roadbed and get the look I'm after.
Later dudes.

It doesn't appear as though you've been delayed in the least. You're moving fast!

Are you kidding? I've been staring at that space on the floor for months now
.