Did not come to fruition. 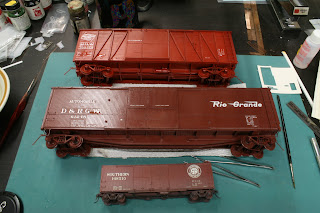 The 2 O scale cars you see are being decaled and will soon be on the way to their proper home.
Both of these cars a rather old Chooch kits. The MILW car kit dates from the mid-80s!
In both cases I was very much concerned about the decals.
The MILW car came with conventional water-slide decals. Being as old as they were I was concerned that they would fracture and turn into many little pieces when they were immersed in water. For those decals I took precautionary measures and coated the decal sheet with MicroScale liquid decal film. The product basically adds a layer of film over the old decal, holding it all together.
The D&RGW car was another matter. All we had for this car was dry transfers, which are notorious for having a limited shelf life. For those I took a different route.
I took a sheet of clear film, sprayed a coat of flat over it. ( A needed step for dry transfers. They don't adhere well to glossy surfaces.) Then I simply transferred the desired lettering onto the clear film by rubbing with a pencil, and then sealed it all with a coat of liquid decal film. The old dry transfers went onto the decal paper with nary an issue.
From there it was a simple matter of decaling in the traditional manner.
I still can't get over how massive the 50' D&RGW car is, especially compared to an HO car below it.

The Rio Grande boxcar was produced for Rails Unlimited not Chooch.