What's Jay got in the box?

Well it's not a cheese straightener!
(Bonus points if you know the joke.) 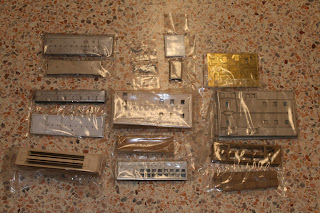 It's 12 caboose kits!
Those fine people over at Lake Junction Models came through for me.
They offer a Missouri Pacific caboose kit that is painfully close to the Wabash 2600 series of cabooses. 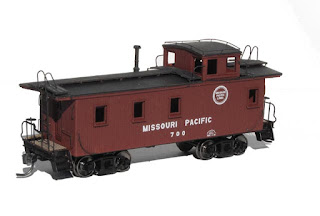 The biggest distinction is the running boards. The extra bits around the cupola don't belong.
That's easy enough to make happen.
The other major detail variant is the 4th window at the cupola end. Some of the 2600 cabooses had them, some didn't. Some had only one on the left, some only had one on the right.
To replicate that I had Lake Junction cut me a number of sides without the 4th window. That way I can mix and match as I wish.
With this influx of kits I'm now well on my way to having the needed amount of cabooses for the layout.
There's actually a 13th caboose kit in the box, but I'm not talking about that one yet.
It'll be a surprise for later.

A Surprise with a capital S?

It would be interesting to see your strategy for gluing/soldering these kits together.....eutectic bliss!

"Those fine people" at Lake Junction Models is one man......Bill Hoss. I am glad to see he is back up and running after the fire he suffered some time back.

I have a question......what trucks are you going to use?

Gary,
Trucks are going to be a problem. really accurate copies of the prototype just don`t seem to exist. The closest I found recently was from Walthers, but they are out of stock.
So I suspect I`ll be using Kadee archbar caboose trucks