In an Aylmer state of mind

What do you do when it's stupid hot outside?
You crawl on the floor of the basement and draw out a town for the layout. 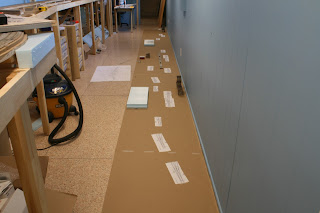 I spent a few hours this afternoon sorting out the town of Aylmer, Ont. Not a large town, but in the era I model it was a busy place. A large canning plant, a milk condensing plant, a huge tobacco warehouse, along with the requisite coal dealers, stock pen, feed mills, team tracks, etc.
Not counting the team track there are 8 distinct car destinations/shippers. Should keep the way freight crew busy banging cars around.
I purposely kept the scene as open lengthwise as I could. This scene will be a good 28' long when it's done. Not bad given that the prototype is almost 2 miles long.
What I like about that is that the way freight crews will be covering a lot of distance to get the jobs done, which requires time and will give a sense of accomplishment. And hopefully crews will remember not to leave the brakemen stranded at the other end of the town!
Of course serious compromises have to be made.
Imperial Tobacco is located further north than I can represent it and the spur turns 90 degrees from the main before entering the plant. Instead I have the spur parallel to the main and the plant will be represented with building flats on the wall.
Aylmer Canners should be 1/2 a mile south of the main on it's on spur, but again space limitations require that I make the spur parallel to the main. I'm also going to have to, mirror image the structure and rotate it 90 degrees to get it into the layout. That building is represented in the photo by the block of styrofoam furthest from the camera.
The closer block of foam is Carnation Condensed Milk. It's going to be a busy place. A coal spur for the boilers. and multiple loading spurs for crated product. Daily inbounds of tin cans from Simcoe.
I'm going to leave this on the floor for awhile and stare at it off an on before I make sawdust.
One needs to be sure about these things.