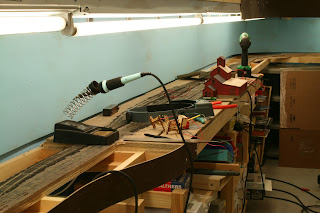 The layout has hit the "grind" part of it's life.
90% of the track is in. I have some turnout work in Courtland and Delhi to finish up, and the staging yards for the CN Hagersville Sub to take care of.
The really big task now is wiring it all in. Soldering drop feeders and connecting them to the power bus, along with dropping feeders for frog polarity control. Wiring is now complete as far as the west end turnout in Courttland. That includes the liftout section that bridges the doorway. 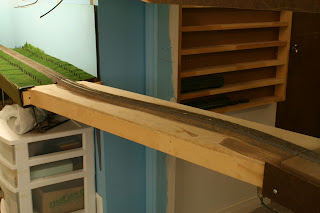 As I was finishing the wiring in the Tillsonburg CPR interchange yard, a short circuit  occurred. In my usual thorough fashion I overlooked the obvious as I spent an hour trying to establish the cause of this short. The diamond, which was built with a jig purchased from Fast Tracks, was the source of the trouble. However I still maintain that I had checked it when it was built. Some quick work with the Dremel cutoff wheel restored normalcy. 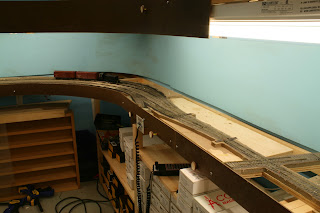 I've chosen to use Fast Track's Bullfrogs for turnout control. They solid, simple and robust. Cheap too! Installation is simple and the system includes linkage components used in RC aircraft. Certainly worth considering. 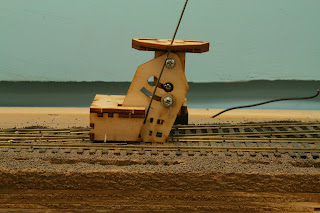 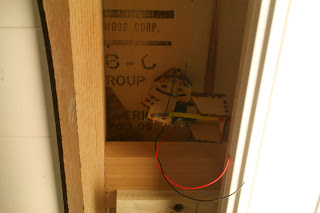 Once I resolved the short in the diamond at Tillsonburg, I ran a test train along portions of the layout that were wired. Where I made a most intriguing discovery.
I'm using a Digitrax DCS 100 as a base station, with a DB 150 as a slave for half of the layout. I"m also using PSX4 from Tony's Trains for circuit protection. 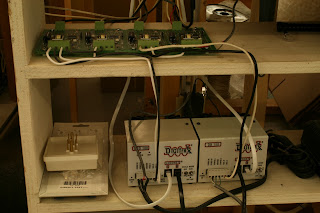 I live in a relatively small community,(25,000) that used to be a major railroad centre. In it's heyday St Thomas hosted 5 Class One Railways and an Interurban. There are few surviving railroad men from the 50's still living here, so I was delighted to meet a fellow who hired onto the Wabash in 1954 as an engineer and is still living in St Thomas.
I had Jim Rice over to visit yesterday so he could have a look at progress on my layout. I was thrilled to see the delight on his face as he viewed what I was doing. He was particularly entranced by my fleet of paired F7s, all with correct Canadian numbers. " I ran every one of those engines." he said.
I think I'm doing something right.