A day out with Barry, and Trevor

I spent the day, Friday , in the studios of TrainMasters TV filming a few episodes for the series "Notch 8". 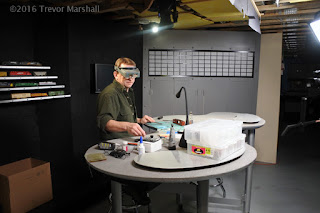 With my pal Trevor Marshall as host, we filmed 4 segments for the ongoing series that looks at somewhat more advanced modeling projects. I won't divulge more details than that, log into TMTV and see for yourself what's going on.
This is not Youtube videos. TMTV is professionally filmed, high quality videos that cover so many different aspects of our hobby. While there is a fee, it's cheap entertainment.
The segments filmed will be online later this year, I'm told.
My thanks to Barry Silverthorn for providing the studio and the expertise to create such high quality video.