Inspired by the work I'm doing on a couple of Bachmann Consolidations for a client. (A quick repaint and redecal), I dug out my Bachmann Consolidation.
My late friend Rich Chrysler had taken one of those very nice models and turned it into a CNR prototype for me.
He altered the cab, adjusted a few details on the pilot and substituted a switching tender. I pulled the model out yesterday, considering selling it. But once I saw it again, it brought back many memories of Rich and I knew I couldn't part with it.
Now even though I model the Wabash's operation in Ontario, it is all CNR physical plant, thus it is CNRs responsibility to maintain it. So the plan is to build a work train, pulled by this engine with a few truss rod double sheathed cars and such.
So I spend a good part of the morning installing a DSD in the tender. It took a little doing just to get all the bits in, but we succeeded. I fired up the programmer and started that bit of voodoo.
When I tried to get the model to move under it's own power, the motor just hummed. Something was jammed.
I got the boiler off of the chassis and the reality was revealed!
At some point, probably during the move last year, the model was dropped and the white metal chassis is bent. The slots for the driver axles have closed up and are very nicely clamping the axles. 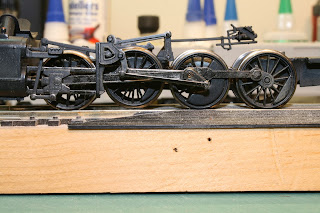 As you can also see the 2nd driver is in the air and the cylinders are actually cocked out of position.
A quick trip to the Bachmann website shows that they are out of stock for replacement chassis, but I will call tomorrow anyway, hoping that they may have just the white metal part, which is all I need.
If you know where one of these parts might be, please let me know. I very much want to get this model running again.
Thanks

Sorry to hear about this - certainly a sad tale.
I don't know for sure if the chassis has remained the same throughout the many production runs of the 2-8-0s, but I do know the boiler shell and tender frame have changed. Basically, the mounting posts and associated holes are in different places depending on when the things were made. (In other words, if this is an early 2-8-0, which I suspect it is - Rich emailed me a couple of times way back when asking some specifics on Iain Rice's construction of the CV N-5-a from this engine - then you may find a newer chassis isn't a drop in replacement for the older boiler shell.)
Best of luck,
Marty

And the good news is:
I just got off the phone with Bachmann, and after some digging they found the last replacement white metal frame.
It never hurts to ask!