Aylmer is now without short circuits. 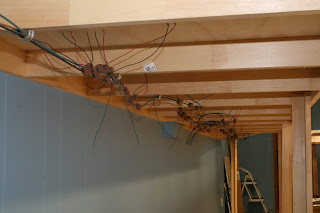 I cut my losses and removed the entire bus and started hunting for the shorts from there.
Turns out I had 3 major issues.
One turnout had a sliver of copper not cut through which I found by passing a file over the suspect turnout.
3 turnouts all had the same issue. The feeders for the stock rails were pinched under the pc board ties and as a result were shorting out. Easy enough to fix once discovered.
The 3rd issue is really the main cause of the first 2. I was a bit of a dumbass. I should have checked every turnout as I built them to make sure the pc ties were fully cut. And I should have been checking the trackwork as it was being laid.
I could have saved myself a few hours of creative swearing and the cost a few Insulation Displacement Connectors. (Which, by the way, I'm in love with!)
Aw well. Lesson learned. Won't make that mistake again.
On to fresh tragedies.

Now I can wire in the frog juicers and run the cable for the UT-5s and I can test the track.