I can here it now!
"What the heck are you talking about? It's flat land country out there. There's no call for tunnels in South Western Ontario."

Well there is in my version of the Cayuga Sub. 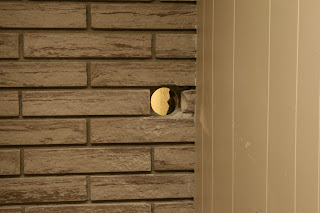 Layout progress as been stalled of late, in part because I couldn't decide how best to get into the other part of the basement, to create the town of Delhi and the east end staging.
After much thought and rethought, I settled on going through the furnace room and coming through the masonry wall, rather than around the fireplace that's down here.
As a result a 4' dia concrete coring bit and a large rotary hammer was rented and the hole seen above was blown through. Noisy and heavy BTW.
But now I can move forward with benchwork for the rest of the layout. Benchwork for me is a summer project since I can work in the garage without freezing.
Looking forward to getting the last of the benchwork done.
Which means we're one step closer to running trains.