While over in Germany I was taken to visit the home layout of Martin Mieburg.
He has really raised the bar on prototype modeling. It`s not enough that he`s doing it a rarer scale, 1/32 also known as #1 Gauge, he's doing it outdoors.
Martin is modeling a shortline from the Wuppertal-Begenburg region in his back yard.
Shown here is the station with most of the track roughly in place. Martin has eschewed toy like garden railway curves and turnouts and has prototypical sized items installed. 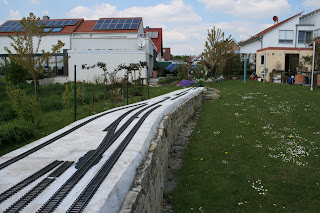 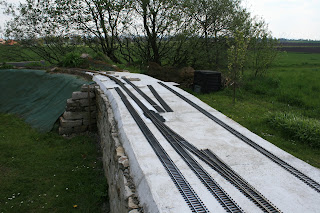 Martin has been experimenting and discovering techniques and materials that do and don't work in an outdoor environment. Little things like ballast. Ballast in this situation has to perform the actual task it's meant for. Drainage control and track securing. Yet heavy rain can wash scale ballast away.
Thus ballast maintenance is an ongoing task.

For whatever reason, Martin has found that radio control is not a satisfactory option for his layout, so he's running current in the rails like an interior layout. Which means keeping the rails clean is important. You would think that that would be a losing battle, but by using stainless steel rail, Martin only cleans his rail twice a year. Now the stainless presents it's own set of challenges, like soldering rail feeders. There Martin has turned to industry and studied what is done in the real world with electrical connections in harsh conditions and has replicated those processes. 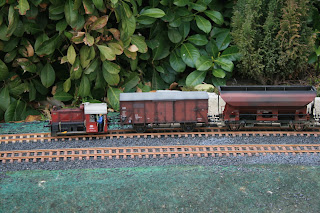 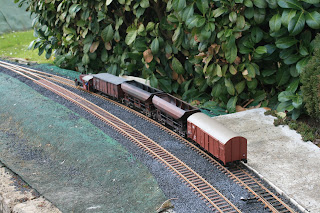 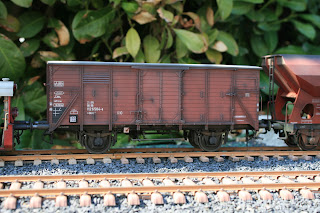 The rolling stock is a delight to behold. Magnificent models with lots of detail to behold. And the loop and screw couplers are fully functional.
I'm very much looking forward to seeing more photos as this labour of love progresses.