I have a real soft spot for German steam locomotives, and my Fremo forays helped scratch that itch.
I love the black boilers and cabs with the red frames and wheels. 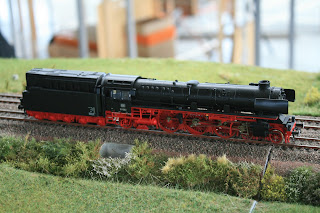 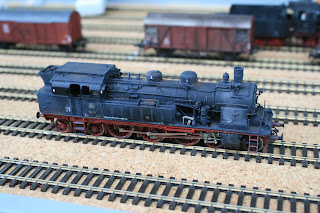 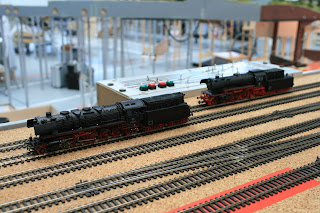 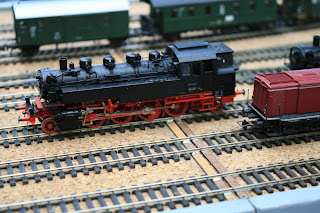 And German modelers are blessed with a huge array of well built and well running HO scale models. I've been told that most of the German steam locomotives are available as models. We should have such problems over here in North America!
For some time now I've owned a very charming German train consist. 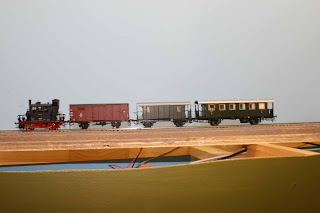 This loco is nick named "Der Glashaus", or the "Glass House". It is an actual very correct model of a prototype created for servicing the multitude of Bavarian short branchlines. 6-8 kilometers long. The loco was designed to be run by one man, no fire man. Thus the coal hopper you can see. The consist is very accurate compared to the photos I've seen.
But one is never enough. So I came home with a model of my favorite German locomotive. The 86 class. 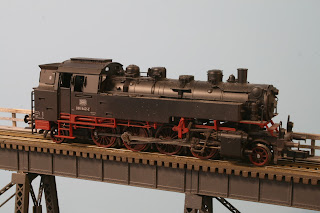 This Mikado wheel arrangement as a tank engine just turns my crank. There were over 800 of these units at one time. This was a lucky find. I got it cheap. Now to talk to my friends at LokSound and get a proper sound decoder installed.
The plan is now to create a German vignette, with these models and some German style structures, just for something different.

My favourites are the 44 class heavy 2-10-0s, the "Jumbos". I've picked up enough locomotives as well as freight and passenger cars over the years to equip a small layout. One of these days . . .