The bridge is now sitting as it should. 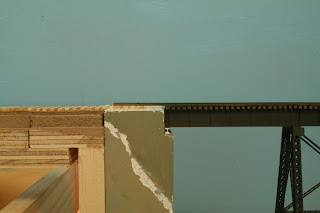 The rails rest on the ties and on the bridge bearings.
I had to toss the cast metal bearings from Micro Engineering and cobble up my own, but once they're painted black, they'll mostly disappear.
It took about an hour to trim the footings for the piers and reglue them back into place.
My thanks to all who offered up suggestions to resolve this issue, with one notable exception. Chris is clearly still suffering after affects from the caulk in the eye incident in the Train Masters TV studio earlier this year.
With things back on "track", the actual rail and ties were glued down and the first acid test performed. 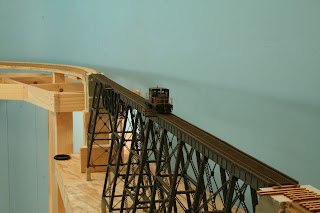 The bridge seems to support Tilley. That's good news.
Now for the next step. 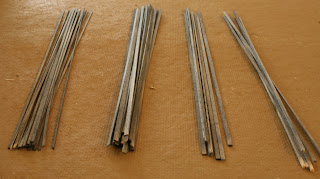 All this strip wood will become the walkway that ran the full length on the north side of the bridge.
That'll be finicky.