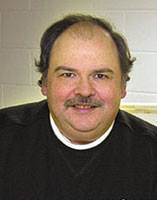 From the Model Railroader magazine Facebook page;
With a heavy heart, I’m sad to report that Andy Sperandeo, who has been a part of our lives at Model Railroader magazine for more than 30 years, has died.
As some of you know, Andy had been fighting cancer and other ailments, and the combination finally caught up with him earlier today.
Andy started work at Model Railroader in 1979, becoming editor in 1993. In time he became executive editor and upon retirement a few years ago became a contributing editor. Readers today are most familiar with Andy through his monthly The Operators column. He has also edited our Great Model Railroads annual since its inception.
Information on services or memorials remains pending at this time.

I consider my self privileged to have been able to call Andy a friend. We always chatted at Naperville and I was looking forward to seeing him again in a few weeks.
Rather sad right now.