Well it's back to regularly scheduled programming, which today featured AB brake parts for the stock cars.
The Westerfield kits included cast resin AB brake parts, which I chose to not spend the time deflashing and fiddling with. Instead I used Tichy AB brake parts. The Tichy parts are a tad undersized but much nicer to work with. I assembled 15 sets of parts in about an hour.
I also chose to alter slightly the mounting arrangement for the triple valve.
I made a simple platform from 3 pieces of 1X8 styrene, which I found goes in quicker and simpler than the various brackets Westerfield provided. 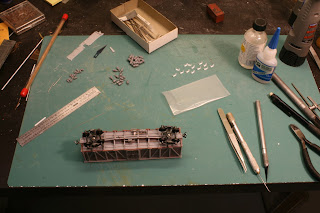 0.010" wire is used to plumb the parts together. The layout of the parts is a tad uncommon. Usually the triple valve is on the same side as the cylinder, but a little variety never hurts.
Probably tomorrow, the brake rigging will get started. Wonder how far these cars will get before the year's over?