Take that Hydro One!

It may be a case of tilting at windmills, (a Don Quixote reference), but I'm hoping to save some money in the long run. 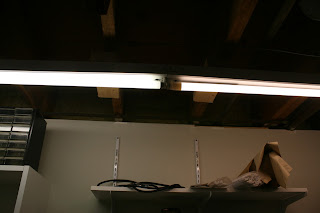 I just purchased 30 4' LED replacement tubes for all my florescent lighting in the basement. They are purported to draw 1/2 the power of T-8 tubes. Given that Ontario has one of the highest electricity rates in North America, anything I can do to reduce my bill is a good idea.
The tube on the right is one of the LED units. It's a little warmer than the old T-8 to the left, but I'm okay with that.
And they aren't cheap! 30 tubes cost almost $900.00 after taxes and that was with a deal from the supplier. But given the fact that 1/2 of them are on upwards of 12 hours a day, I should recoup the expense in a year or 2.
The best part is the fact that the actual tube is plastic, not glass. I can go back to dropping things again without fear of shards everywhere!