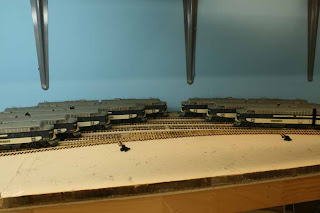 When the Wabash dieselized their operations in Ontario in 1950-51, they replaced the K-1 and K-3 class Mikados with 10 pairs of F-7A units built in London at GMD. These units were delivered drawbar connected with the second unit numbered with an "A" suffix. This was done in part to avoid arguments with the railroad unions regarding possibly requiring 2 crews for the lash-ups. These were also the only Wabash units delivered with winterization hatchs. After all it is Canada.

When I was considering building this layout, the clincher was discovering that Proto 2000 had just released factory painted Wabash F-7s with DCC and sound. I ordered 9 pairs for my needs. It was simple matter to remove some of the numbers from the body using Scalecoat paint and decal remover and renumber the units using Microscale decals. The number boards were simply blacked out with a marker and those numbers were also redone.

Winterization hatchs are from Detail Associates and simply glued in place. Every unit was then lightly weathered to show some use. They are almost brand new after all.