The waiting is over 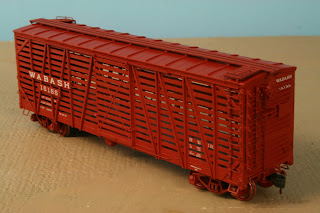 I am now taking orders for the first kit of my resin kit line, the Wabash Stock car.
Ordering info can be found at Yarmouth Model Works.

I also expect to shortly have available detail parts. My plan is to offer those parts that I've been looking for, for my own models and have had to have created.
The first ones will be a bit of surprise. Check in every now and then. 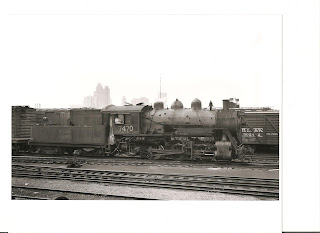 A fellow blogger, A R Pollard, who pens No Two Alike recently wrote a well thought out piece on traffic patterns and freight car fleets, which as inspired me to bang away on the keys a bit to share my thoughts on this topic.
Let me preface this by stating that I have an enormous amount of respect for Tim Gilbert, Tony Thompson, and all the others who have worked very hard to create the traffic analysis data that is the mainstay for much of the thinking that currently covers this topic. And for the most part much of what they state is irrefutable.
But the thing to remember is to never say never.
Case in point is the photo above. Look at the DL&W car to the right of the 0-6-0. It is a stock car that has been lined on the inside for coal service. When I first saw this image I was confused about the sheathing on the car. Because of how the light is hitting it, it looks very much like clapboards with braces over top. Which we know is not how cars are built. But I had to inquire on STMFC.
The gentleman who replied,(and I apologize, I can't remember his name) was shocked to discover that this photo was taken in Windsor, Ontario. Yes that is Detroit in the background.
He was a major DL&W fan and until he saw this image would have sworn that that class of car never went offline. And yet there it is in Canada.
Further, of the first 16 cars covered by Ted Culotta in his Essential Freight Car series, 12 of them showed up in Palmerston, Ontario between 1945 and 1952. Not bad for a small Canadian branchline hub.
So my point is to restate something another freight car researcher once said to me. In the postwar era and into the 50's, just about everything went everywhere. Within reason.
If you like a car, put it on the layout. Let the experts prove you wrong.
Never say never.

A Tribute to My Friend 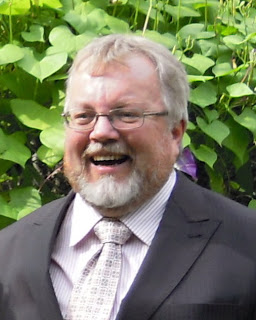 On Thursday last, my friend and fellow modeler, Rich Chrysler, passed away after a short battle with pancreatic cancer.
Rich was a talented modeler who was instrumental in my evolution into prototype modeling. His skill sets were only overmatched by his generosity and his willingness to share.
His CN Hagersville Sub can be seen here in video made by his son and accomplished modeler in his own right, Geoff. http://www.youtube.com/watch?v=giAlsus-SPQ
Rich's other passion, other than his family, was restoring and driving Austin-Healys. So I've decided that a fitting and permanent tribute for Rich will be to place an Austin-Healy on my layout. 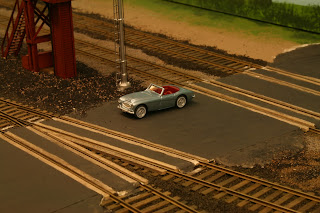 The car is seen in this photo crossing the main in Aylmer, but it will have a permanent home on Highway 6 as crosses the main in Jarvis, once I have the scene completed. Rich's Hagersville Sub shared the mainline with the Cayuga Sub from Jarvis to Simcoe, so I imagine that had he been able to, Rich would have driven that road many times in his favorite car.
Rich also modified the 2 brass Moguls I have to run the CN trains that shared the main with the Wabash trains, so his presence will linger for many years to come.
I'm going to miss my friend a lot.
Thanks, Rich.