Finally, the test assembly of the parts is done. 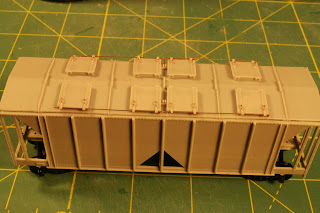 And I'm very pleased with the final result.
I won't lie to you. The assembly of the latch rod supports and the hatch hold-downs is very, very fiddly. Certainly not a task to be undertaken after 3-4 cups of coffee. But a little patience and perseverance and a very satisfactory result will be attained.
Kits will be for sale in 3-4 weeks, just as soon as the casting elves get up to speed.
I would urge anyone interested in the model to get a copy of the latest RP CYC. The issue covers all the variants of this car. Lots of great photos and useful prototype data.
No decals will be offered by Yarmouth Model Works. But I do know that a number of people are working on correct decals for this car.
No comments:

If you've been trying to purchase from my other site, Yarmouth Model Works, in the last few days, you'll have noticed trouble with our Paypal shopping cart.
It certainly is not working the way it should be and for that I apologize. We are working on getting things back to normal.
Hopefully not more than a day or 2. 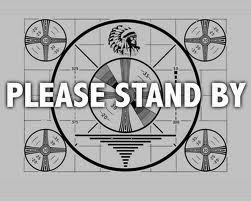 Stuff I shouldn't have to do

I just mailed back to the client his 12 Southern coal gons. They were here in the shop for remedial work to address a problem. 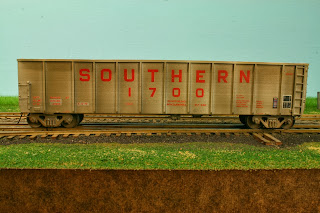 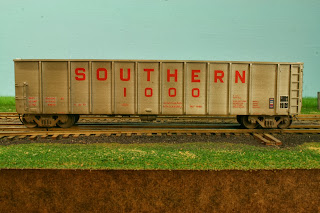 This all started when I was almost finished these cars. I had mounted them on their trucks and gave them a push on the layout, where they promptly flung themselves to the ballast. Repeatedly!
A little investigation revealed that the bolster cap was resting on the truck side frame and that there was a gap between the bolster base and the truck bolster. I created a washer from 0.060" styrene, which was what was required to create a sliver of clearance between the sideframe and the bolster. From there I had to shim the draft gear down by an equal amount to get the coupler to the right height. Not an elegant solution but it worked.
Once the client received the finished cars, he did a little research and discovered that the bolster shape in the kit was fundamentally wrong. It should have curved upwards towards the floor to create space for the sideframe and allow the car to sit over it's trucks.
We had a conversation about this and I offered to alter the cars to get them to sit right.
The change required that the bolster cap be trimmed back and the bolster flanges shaved down to give the required clearance for the sideframes. 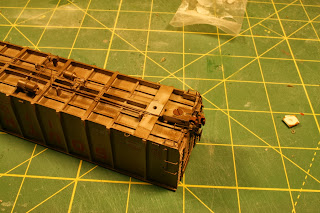 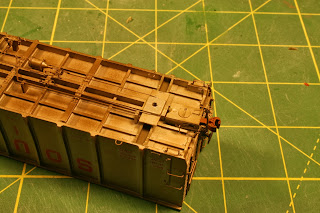 Not a big job, but one that ought not to have happened. There's no doubt in my mind that the kit maker was aware of the issue and did nothing to rectify it or advise his customers. Am I being fussy? No doubt. But this should be basic stuff.

The 20th Anniversary RPM in Naperville

Hard to believe that it's been 20 years.
Martin Lofton started the Prototype Modelers Seminars all those years ago. A gathering of like minded prototype modelers who shared ideas, techniques and prototype data in the interests of creating more accurate models and model railroads. People travel from all over to enjoy the camaraderie and the exchange of knowledge. From far away as Hawaii and Germany at times.
This year's meet maintained the tradition of fun and excellence.
For me, the event is as much about the clinics and the display models, as it is about catching up with old friends.  I can email the many fellows I get to chat with, but nothing compares to actually sharing a beer and having a few chuckles.
And a big thank you goes out to Bill Daranby, who again invited me and a few other friends to operate on his Maumee Route. That alone is worth the trip. 10 scale miles of model railroad! Awesome!
You know that I'll be going back next year.
Thanks to Joe D'Elia for making this happen.
No comments:

Power to the Pan Pastels!

I love my Pan Pastels!

These three cars were all weathered with various colours of the Pan Pastels weathering sets. I did also use the airbrush for spraying the black oil and crud all over the underbody and onto the side sills, but everything else is Pan Pastels.
Cleaner and easier to use than chalks. Super easy to control.
The packaged sets also include applicators, but I've taken to using flat  artists brushes for finer control.
I will continue to play with this medium and see what else I can do, weathering effect wise. I'll still be using the airbrush and oils, but this product just can't be beat for ease of use and the end result.

Now next Tuesday I leave for the annual RPM in Lisle/Naperville.  Wednesday will be spent operating on Bill Darnaby's spectacular Maumee Route. Very much looking forward to that! Hope I remember all the rules. Thursday and Friday I'll take in clinics as well as deliver my own. Saturday I'll be setup in the sales room with my new kits and my other products from Yarmouth Model Works.
And of course much time will be spent reconnecting with friends.
This event is one of the high points of the year for me. Just entirely too much fun.
Maybe we'll see you there. 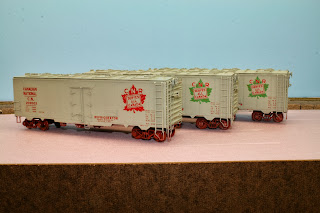 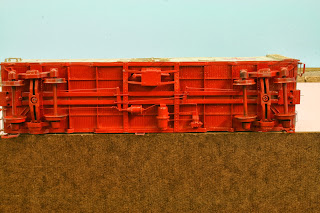 These 3 cars just got their flat coat this morning. I can now hand them off to Trevor. He will apply real wood running boards and weathering. His choice.
In the end these S scale models from MLW Services  rate an "OK". I haven't worked this hard and long on a resin kit in quite some time. But the potential is there. The etched components are first rate. The extensive instructions demonstrate a desire to help the modeler great a quality model.
There are just some speed bumps in the kit that need cleaning up. I have been told by the business owner that improvements and changes with  the castings are underway. Part of the challenge was that I had the "honour" of getting some of the first run casting sets.
These are going to look great in a layout setting. The prototype is unique and striking. I'm very much looking forward to switching them on Trevor's layout soon.