The following statement will soon be up on the Yarmouth Model Works website;

Due to changes at US Customs and Border Protection and Canada Post, we are no longer able to mail small parts orders as letter mail. As a result we have to implement a minimum order policy effective immediately.
Orders will now have to be have at least $40.00 before shipping costs are added.
I very much regret having to do this, but the government agencies leave me with no option.

Government sticking it to small business yet again.

Well that only took 2 years

It's been one of those on again, off again, on again, off again projects.
2 years ago, a client sent me 4 Mullett River Sacramento Northern caboose kits to finish for him.
3 had been started by a 3rd party, but I was tasked with finishing the first 3 and completely doing the 4th kit
Now I enjoy Mullett River O scale caboose kits, but as with all things, they have their challenges. 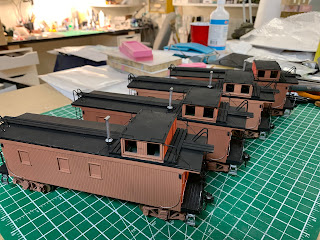 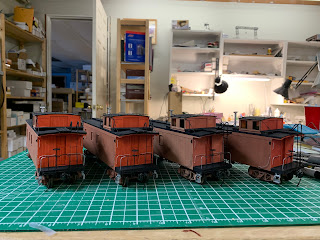 A few of the things to address
Draft gear mounting. There is no provision in the kits for mounting draft gear, so I cobbled up something to take the Protocraft scale couplers
End railings. The supplied parts did not reflect the tapered vertical stanchions used on the prototype, so cast parts were sourced and railings built up from there
End ladders. The supplied ladder stiles are not at all like the prototype, so custom etchings were done and 0.033 wire formed and soldered to the top of the stiles
Marker light brackets. No parts supplied so I cobbled up something out of styrene and modified some plastic marker lamps so that they can mounted on either end of the car
Lateral running boards at the cupola. Again the kit supplied parts were not reflective of the prototype so new ones were created.
Hand brake mounts had to be cobbled together from Precision Scale parts

Along with the fact that a few key parts were missing from the first 3 cabooses, which required sourcing from a few suppliers
All the windows have real glass panes installed
The client supplied very specific custom mixed colours for each car.
Now we're just waiting for some custom decals that are faded like the prototype and these babies can make their way home

Packing is going to be a tad tricky, but I have a few ideas...