So a thread seems to have ended recently on the STMFC Yahoo Group. It covered many of the trials and tribulations of resin casting. The apparent end of the dialogue, which was very informative, coincided with my preparing to build 5 S scale reefer kits that have recently come on to the market.
The dialogue covered many facets of the difficult art of resin casting. It's easy to do, just very hard to do well. I know this from my all to frequent experiences with poorly cast kits. And I know how hard it is to find a caster who is really competent. Which in part was the cause of the delays with the CPR car release.
So when I started inspecting the casting from the kits my heart went out to the distributor of the these new reefer kits. I know that he's using a third party for his casting, since we've discussed caster options more than once, so I can't blame the distributor too much for what you're about to see. 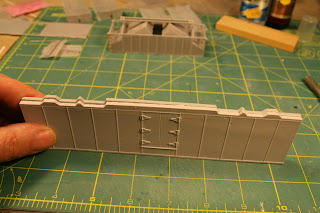 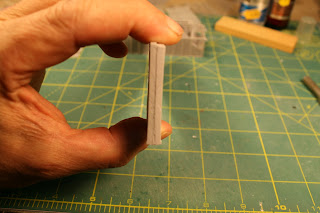 First the sides. The top of the sides in the photo are flush. As you can see, the side casting to the rear is taller on one end than the other. By 0.040"! And only on the one end. I don't know what the caster has been doing to the molds, but that is brutal. And I can't fix it with sanding. 2 of the 5 sets of car sides are like this. And no I can't mix the screwed up sides to get a better match, I tried it.
The ends have their own special deal going. 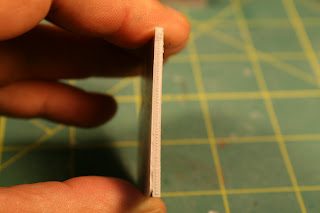 Look closely. You'll see that the face of the part is not parallel to the back. I'm not sure how this was achieved, but I'm not impressed. About half of the 10 ends are like this. At least I can fix this, I just won't enjoy it.
To his credit the distributor is replacing the 2 sets of bad sides straight away. And I know he's at his wits end trying to figure out what to do. Like me, he's not inclined to try and learn the craft of casting. And I know he paid a good deal of money for this casting work.
Perhaps the caster should have read all the good advice that was just on STMFC on the craft of casting.

Remember back in 1991 when Intermountain Railway Co released the Canadian design cylindrical covered grain hoppers? That would be the firm beginnings of my custom building and finishing career. That summer I built, painted and decaled at least 100 of those kits for the local hobby shop, in a whole variety of paint schemes. Needless to say I became very proficient at building those kits and wholeheartedly sick of them as well.
Fast forward 22 years and I'm at it again, sort of. I have 10 S scale grain hoppers to paint for a client. He assembled the Kaslo Shops resin kits and I've agreed to paint, decal and weather them.
Enough time as passed now I'm no longer scarred by the never ending parade of Canadian grain hoppers.
The challenge now is to match the paint mixes to what paints I have now. My supply of Floquil, like everyone else's is limited.
And in case you're wondering, I've been basically away from home since the 5th of July. We had Pearl Jam in the arena where I work part time rehearsing and teching their 2013 tour. 2 weeks of very long days and nights. No time for trains. We sent them on their way last Tuesday, which meant that I got home Wednesday morning at 4:00 am. Spent 2 days recovering and then the last 3 days have been focused on packing boxes of the CPR boxcar kit and tweaking the new kit. We have more work this week and then it'll be back to normal for August.
1 comment: