2 steps forward, one step back

It's almost been a week since I got back from the awesome Chicagoland RPM.
Much has been said about what a terrific job Mike Skibbe and his crew did. And I'd like to add my thanks and hearty "well done". I know I'll be back and I'm looking forward to seeing more people next year. 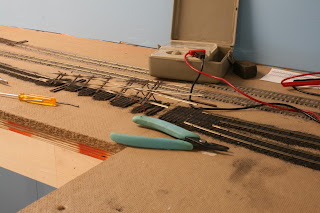 On the home front, I started connecting all the track in Aylmer to the DCC power bus and was 90% done when I thought I'd pause and check the circuit breaker for that section and lo and behold there was a short.
Well as it turns out after hours of searching and checking, there's at least 3 shorts, if not more in the track/power feeds as it sits right now. The turnout shown was shorting between the power feeds because the wires were touching the underside of the pc board ties. I suspect that there's at least one other turnout with that going on, if not more. And there's always the chance that there's a sliver of copper not cut through from the turnout building process.
Object lesson time. Should have checked every turnout before installing on the layout.
Right now I'm thinking I have to cut my losses. Disconnect the bus completely and rail by rail make sure there are no more shorts.
That'll be fun!
And to add insult to injury, the autofocus on my camera has failed. Turns out the lens, new, is more expensive than the entire camera. So a lightly loved unit is on order.
It might be time to take up knitting.

It's that time of year again!

This week is the RPM Conference-Chicagoland.
This annual event, which has been known by a few names, Naperville, Lisle, etc, is now under the stewardship of Mike Skibbe. And I'm very much looking forward to seeing how he does his first time around.
But more important to me, is the friends I'll be seeing and the new friends I expect to be making. Even though we model railroaders tend to do our work in basements out of public view, the camaraderie of like minded modelers can go a long way to re-energize the creative juices. And discussing current projects can serve to inspire, if not help solve problems.
I've yet to have a bad time at this Granddaddy of the all the RPMs, and I fully expect to come home this coming Sunday full of the same sentiment.
If you're going, be sure to say "Hi."
No comments:

I don't know about you,

But I'm impressed with my progress.
Today, Facebook, in a rare moment of usefulness, reminded me that exactly one year ago I started laying ties in the St Thomas yard. 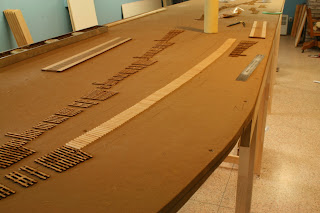 Over the course of the year, I've gotten quite a bit done.
The yard has all it's track and the beginnings of structures and scenery. 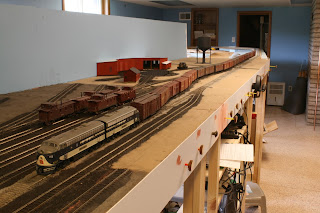 We've come around the corner and built a lovely long stretch of main line. 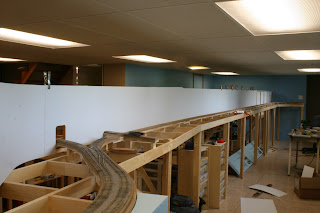 And now all the track is laid in Aylmer, 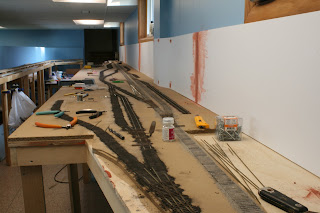 We're still quite a ways away from running trains, but this progress bods well for the future.
I think I'll take a minute and rest upon my laurels.

It's like eating an elephant. One bite at a time.
The rails are all in in Aylmer.
Now I can focus on painting the backdrop, wiring, turnout control, and structures. Oh yea and scenery. All the really fun bits.
I'm really excited with what I've done with this town. It'll take a good amount of time to switch once operations start. Which is the whole point. Operators will have to think about planning their moves properly as well as remembering where the brakeman are. Make him walk a mile cause you forgot about him, and that brakeman will be some pissed off at you.
Now I have to research traffic patterns in and out of the milk condensing plant. It looks to be a busy place. 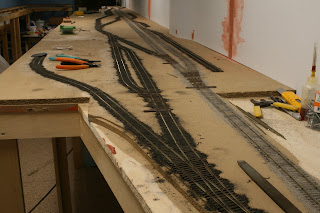 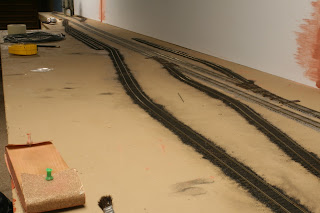 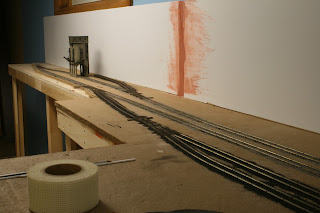 My high school English teachers would be spinning out if they heard that expression, but it certainly describes the activity.
This afternoon I took a couple of hours to get the backdrop installed down the length of the Aylmer portion of the layout. 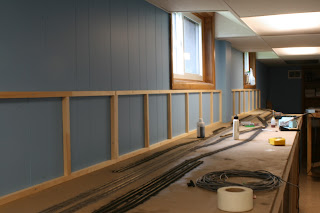 A simple frame of 1x1 was knocked together to support the backdrop material and screwed to the walls.
I could have affixed the backdrop right onto the wall paneling, but I want to make minimal impact upon this basement finish. I won't be living here for ever, and when it comes time to leave I want minimal effort required to get the basement back to it's original state. That same thinking applies to the lighting and the lack of a valance.
With the frames secured, 14" wide swathes of styrene were glued to the frames with the occasional temporary nail to hold it in place. 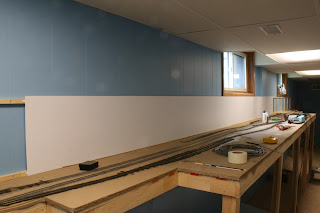 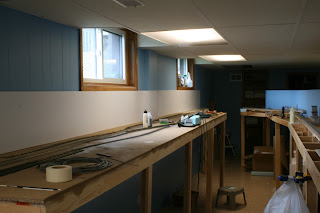 The seams will be puttied with autobody spot putty, which has performed very well on the other parts of the layout.
While that all sets up, the last of the rails will get spiked in place and then serious structure considerations will begin.