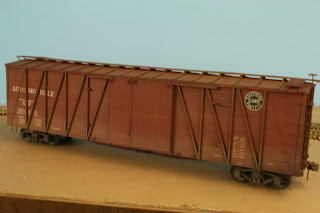 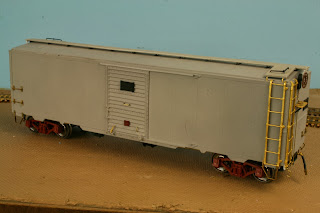 I just finished these 2 O scale resin cars. Both are from the mid 1980s. Back when they were still figuring out what could and couldn't be done in resin.
Both of these cars have stood the test of time.
The SP Auto car was one of Chooch's early offerings. The resin is brittle and exudes a diesel fuel odour when sanded or drilled, making the process a tad unpleasant , but the details are well represented. Those are even the 30+ year old decals.
The flash was rather thick and with the resin being as hard as it was I was compelled to take the model parts to the belt sander on the rear porch. But in the end a very satisfactory model results.
The second car is a model of a 1932 ARA design boxcar for NC&StL made by Lee Turner. Lots of customer supplied after market parts were applied to this car, as you can see.
It's waiting for paint because I've decided to try a new paint line. Tru-Color have taken over the old Accu-Paint line and have added a array of freight car colors that are meant to be accurate versions of prototype road colors. So I've decided to try out their colors on this car and a ATSF Bx-12 from SC&F that I'm building right now. Stay tuned.

In part inspired by the S scale 8 hatch reefers and as part of the ongoing stocking of Manifest #402, I've built 4 F&C HO 8 hatch reefers for my fleet.
Armed with knowledge gleaned from the car history included in the S scale kit I altered a number of details in the F&C kit. 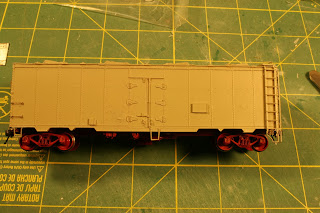 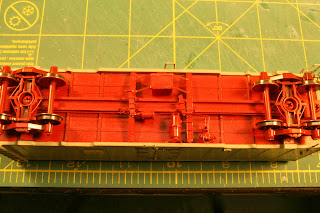 For brake levers I used my etched levers and Tichy turnbuckles were cutoff and used to replicate clevis' on the brake rods. You will note that the reservoir is in an unusual position. This is correct for the early series of CN reefers and 40' boxcars. I also made all my own mounting brackets for the brake components from styrene. The braces for the heater were fabricated from strip brass. 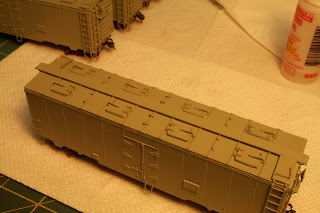 The most involved detail change was for the hatch rests. You'll see that there's a pair of little angles attached to the carlines of the roof for each hatch. The kit does include cast resin parts for this, but they're a tad lumpy and there isn't enough of them. Each car requires 16, the kit had only 14. So I made my own. 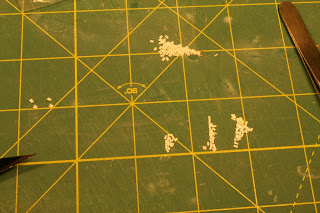 To insure that I wasn't caught short I made 80 hatch rests. 80 pieces of 1x3 6" long and 80 pieces of 1x6 6" long. Glue them together in an L and attach to the roofs.
The things we do!
But they look good, so I don't regret the effort. The car body was painted with CN Grey #11 and the floor was painted with CN Red #11.
The cars are waiting for decals. I had purchased 4 sets of decals from Black Cat Publishing, but do you think I can find them? So I reordered which means the errant decals will surface any day now.
And there's lots of other things going on here as well. Pictures and posts as projects get completed.
Now back to removing the 2' of snow that was placed in my driveway last night.

Make my job a pleasure.

These 3 cars are O Scale Chooch resin kits. Sadly no longer available, but they do show up on Ebay and at swap meets.
The FGEX reefers are particularly stunning pieces. Jim Zwernemann, who did the original patterns for this kit, did a stunning job. The T&G plank sheathing shows the lighter middle groove in the 1x6 plank, suggesting 2 1x3 planks. My friend Bill Welch is working on replicating this in HO scale for an upcoming project.
Custom ladders and other Delrin parts were created and cast for this reefer as well.
The Soo Line sawtoothed Fowler is a long time favorite of mine. Both the prototype and the models. Again another very well executed offering from Chooch.
While the Chooch line is no longer sold, Southern Car & Foundry is working at offering O scale resin kits, as is Rails Unlimited. Good thing I'm well set with HO scale. O scale gets tempting at times.