A Sledgehammer to Crack an Egg?

Maybe, you decide.
I've been having trouble with my Bullfrogs. The devices that I use to control my turnouts. Mechanically they're delightful. It's the micro-switches for frog polarity that are giving me a rash. They keep going out of trim. A week before the last ops session I went around and adjusted everyone of the little devils to make sure all was well.
On the day, 6 of the little beggars were out of alignment and interfering with reliable operations.
Enough I said, time for the big guns.
Time to go shopping with Tam Valley Depot. They make this delightful bit of electronic wizardry called the Frog Juicer which will automatically correct the polarity of the frog as a train crosses the gaps. Ya gotta love DCC. The stuff you can do.
I ordered enough Frog Juicers to do the entire layout. 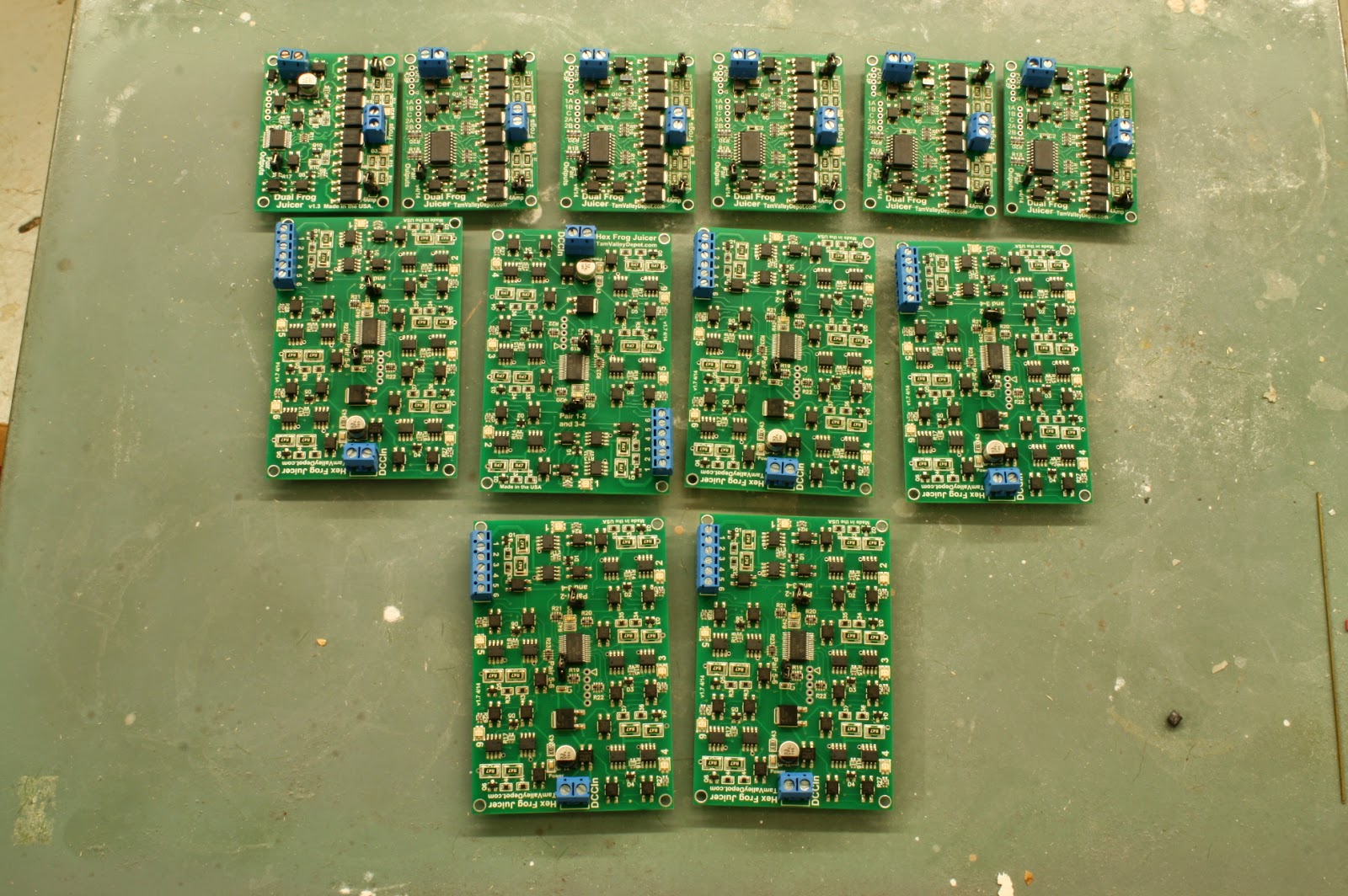 This is what $580.00 worth of Frog Juicers look like.
Today, my pal Trevor came to town and we installed them all. Took us 5 hours to upgrade the whole layout. 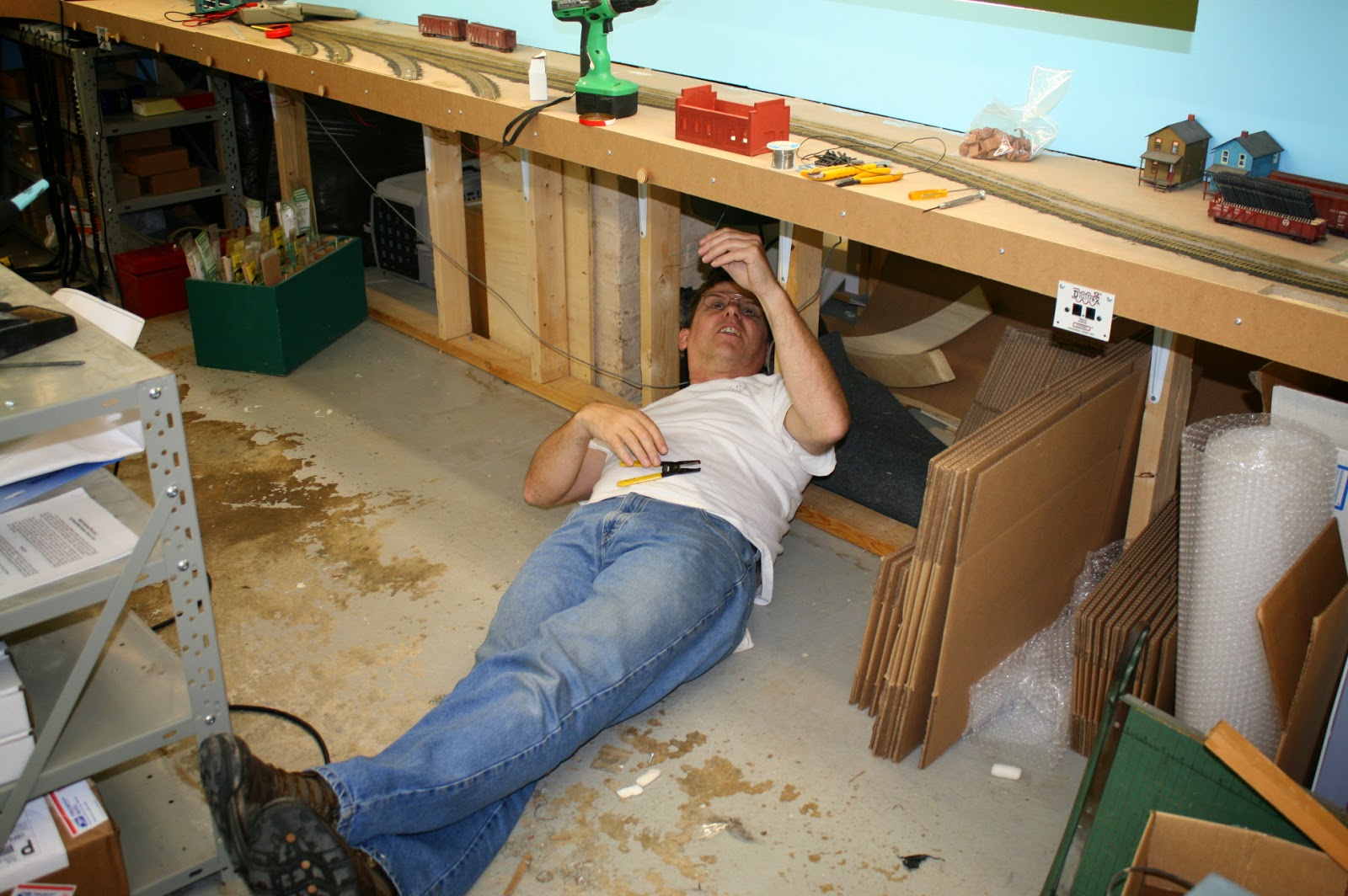 One of the reasons for doing this work is that I'm getting to the point where I don't want to be doing this anymore. Getting a little old and cranky for the crawling around on the floor thing.
Everything now works as it should. Little blinky LEDs under the layout. 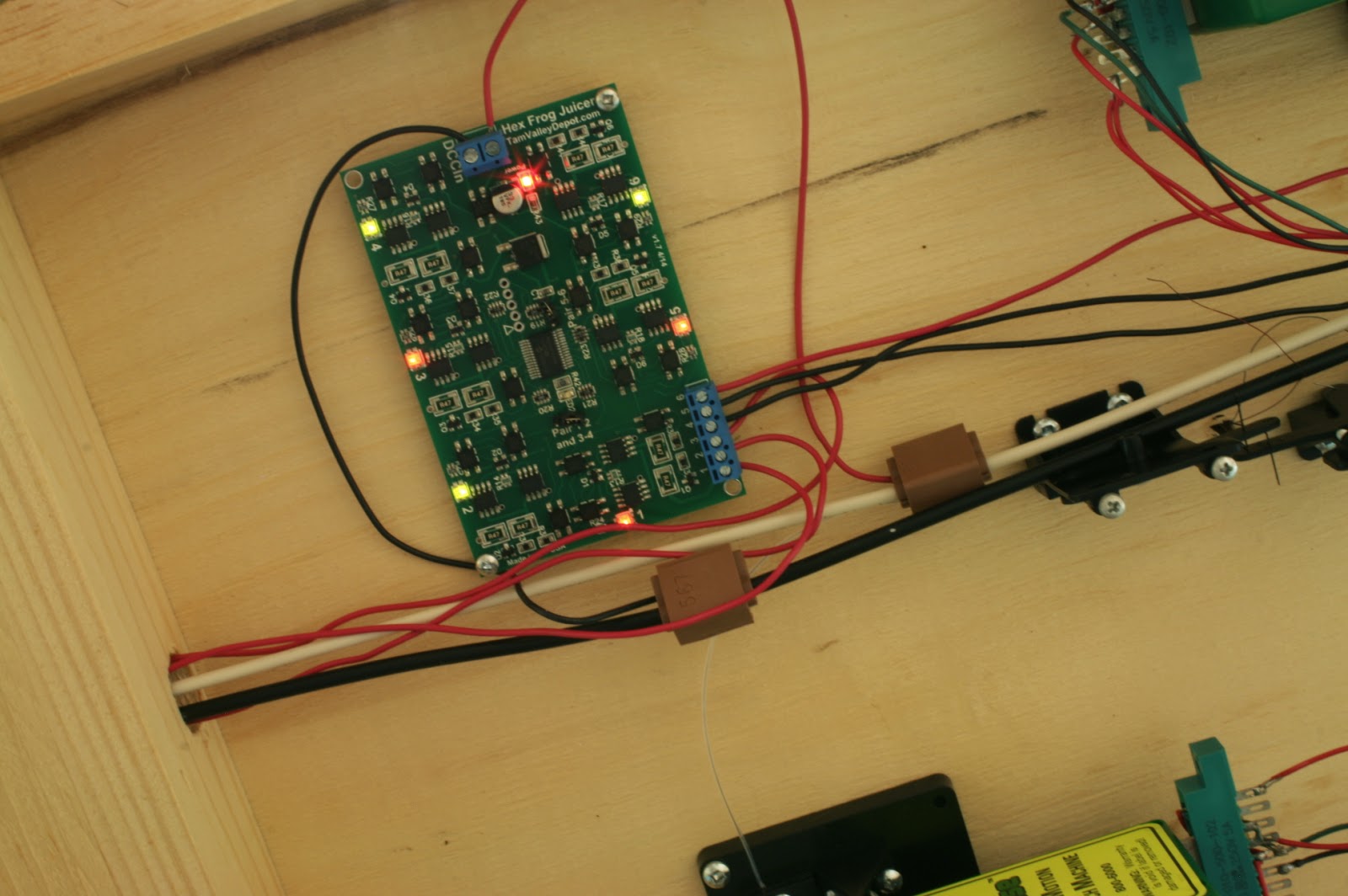 And of course Poo, our guard cat, had to make sure that the box of Supertree armatures didn't blow away in the frenzy. 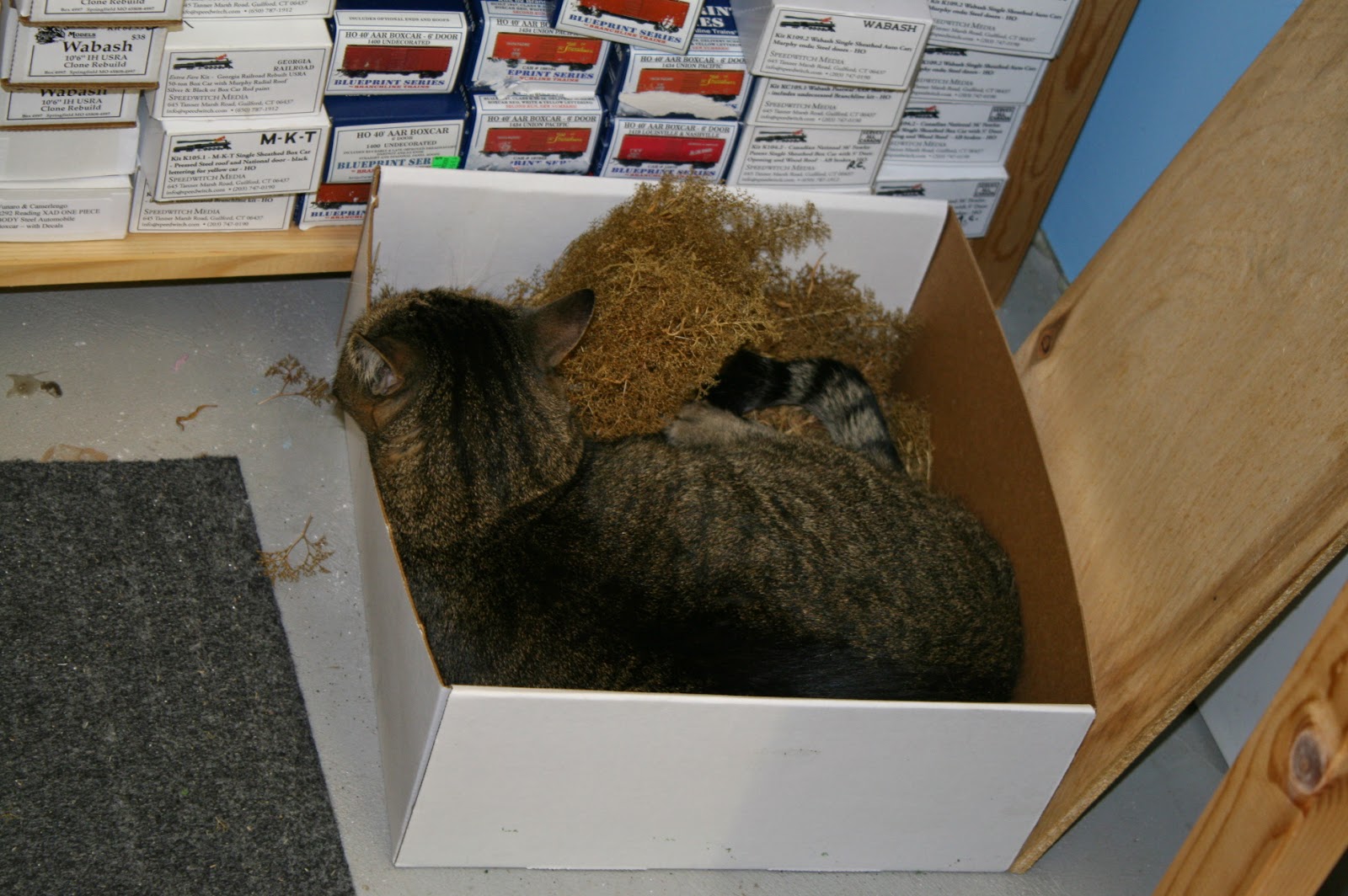 He likes boxes and helping in the layout room when visitors are present.
For some the investment in the electronics maybe overkill. For me it was something I had considered at the outset when I started this layout. Should have listened to my instincts.

My business, Elgin Car Shops, relies heavily upon trust.
The clients who send me their kits to build trust that I will treat their treasured kits with all the respect and care they are due. Many of the kits that come to me are irreplaceable.
I respect and honour that trust. And I understand when clients contact me, inquiring as to progress when they haven't heard from me in awhile. I'm very busy, but never too busy to allay the concerns of a client.
On the other side, I trust that my clients will pay me promptly once I invoice them for my work. The nature of a small business working across international borders makes it difficult to bring any real pressure to bear upon a client who hasn't honoured his side of the bargain.
So I have to resort to this forum.
Mat Wobig of Minnesota. You owe me money.
You have ignored my emails. I'd rather not have to create this posting but I feel no other option is available to me.
Send me a check and I'll take down this post
No comments:

In the ongoing effort to offer better detail parts, I'm pleased to offer these new parts.
6 etched stirrups and 2 etched running board styles. 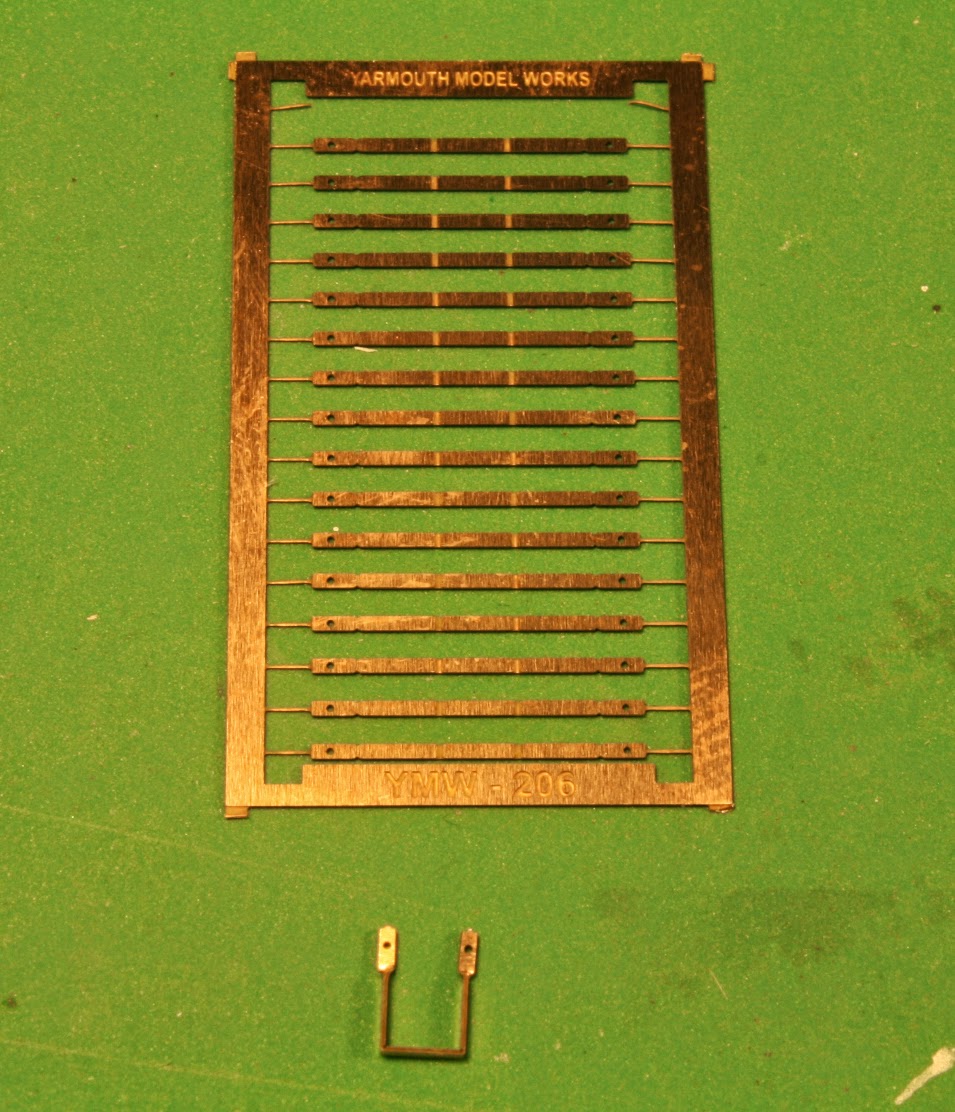 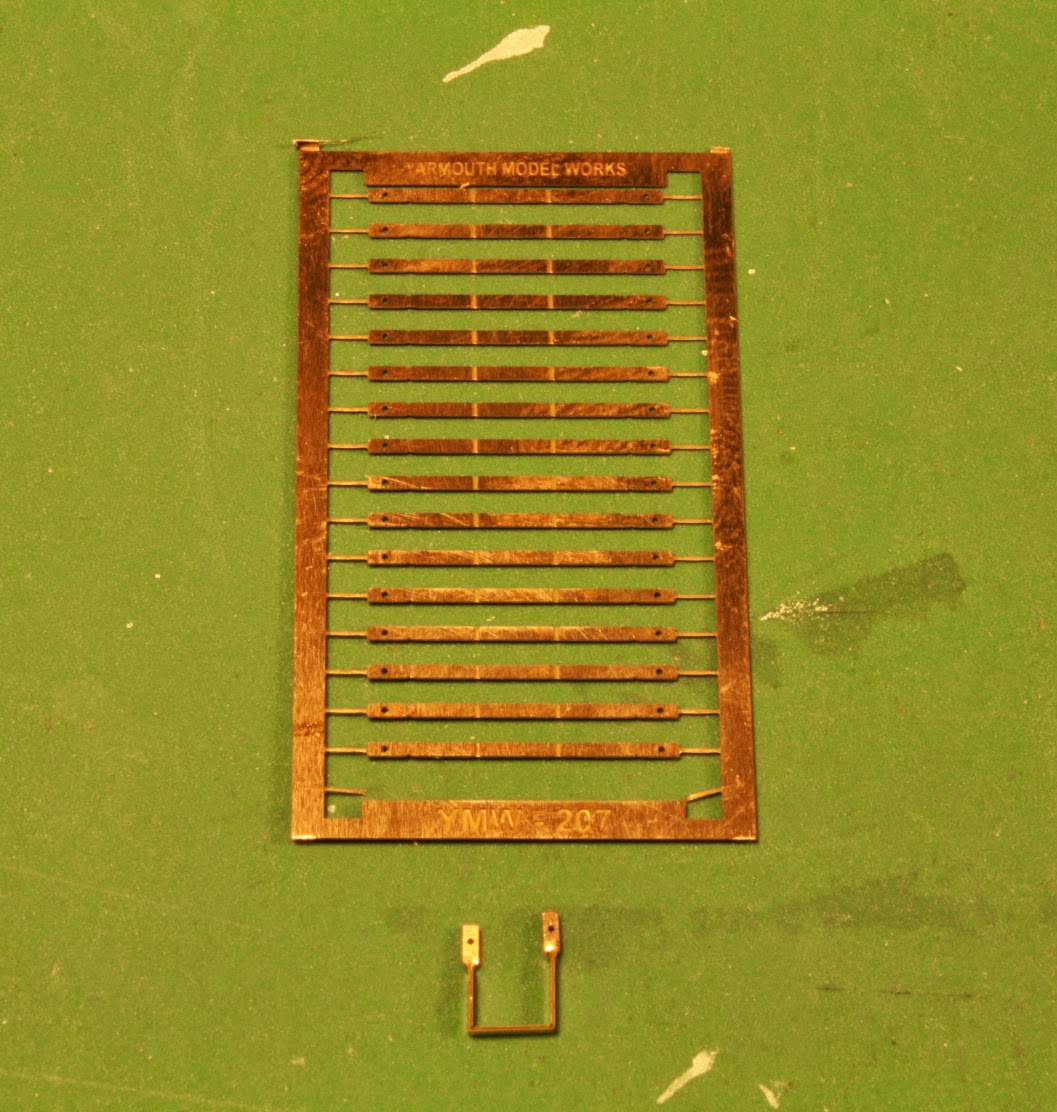 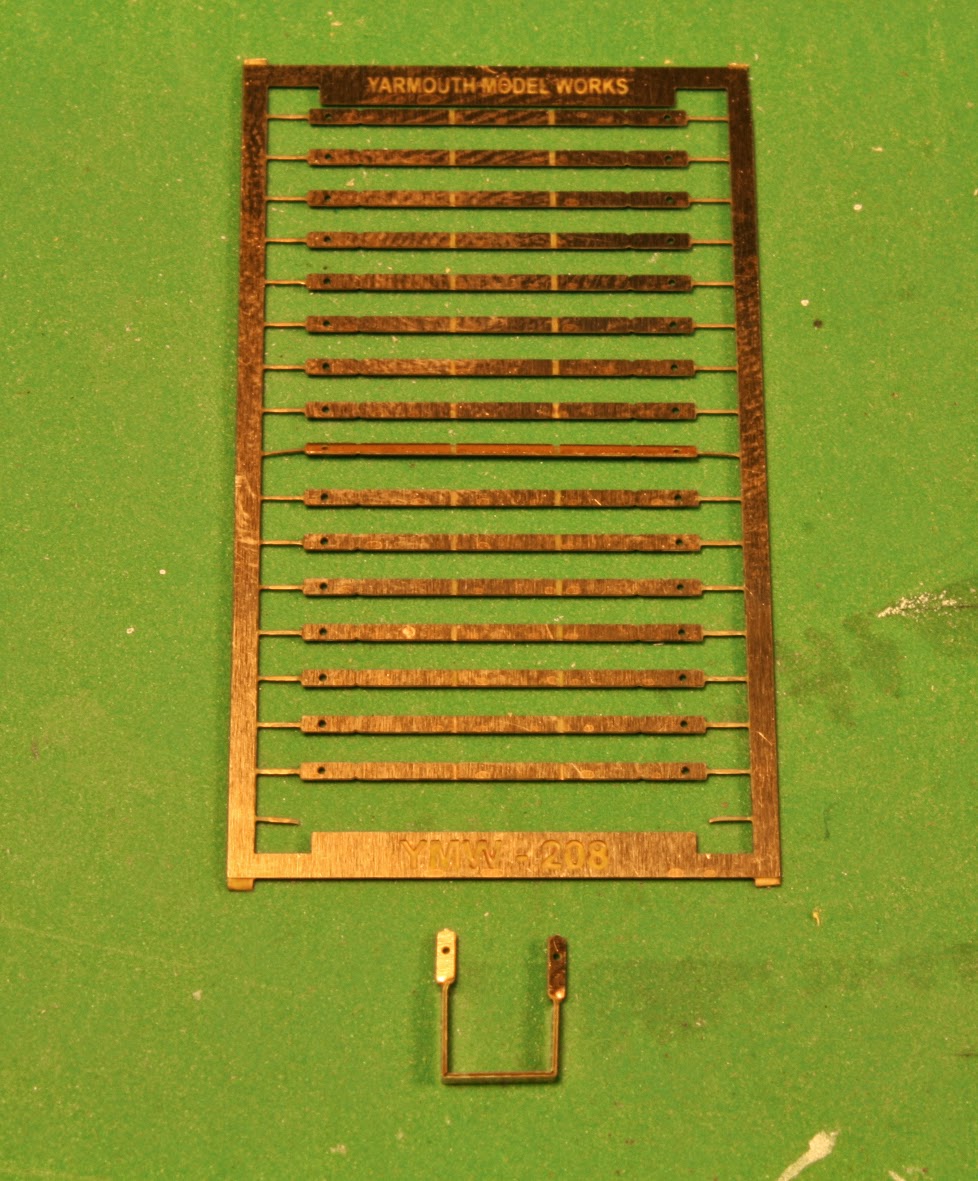 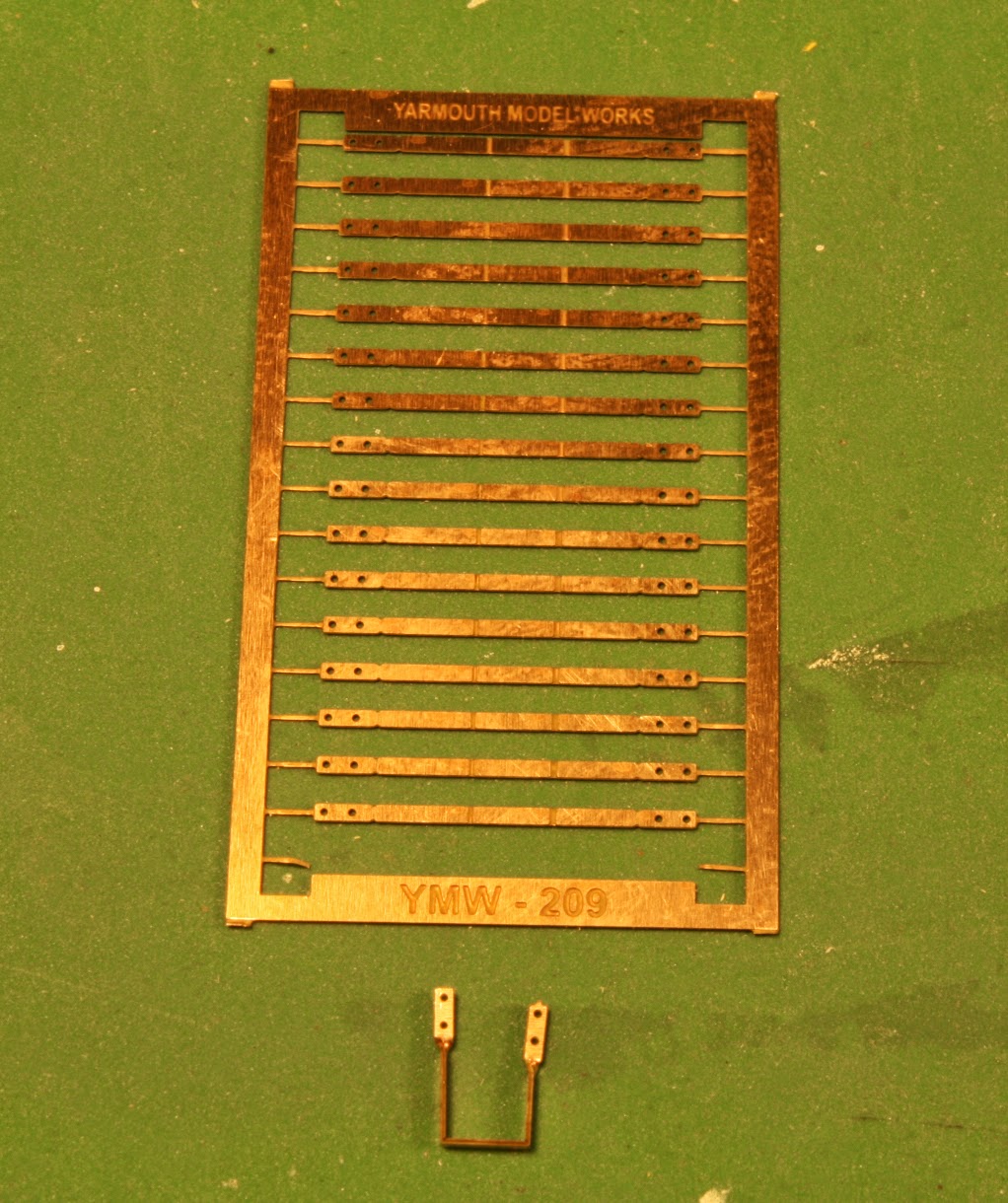 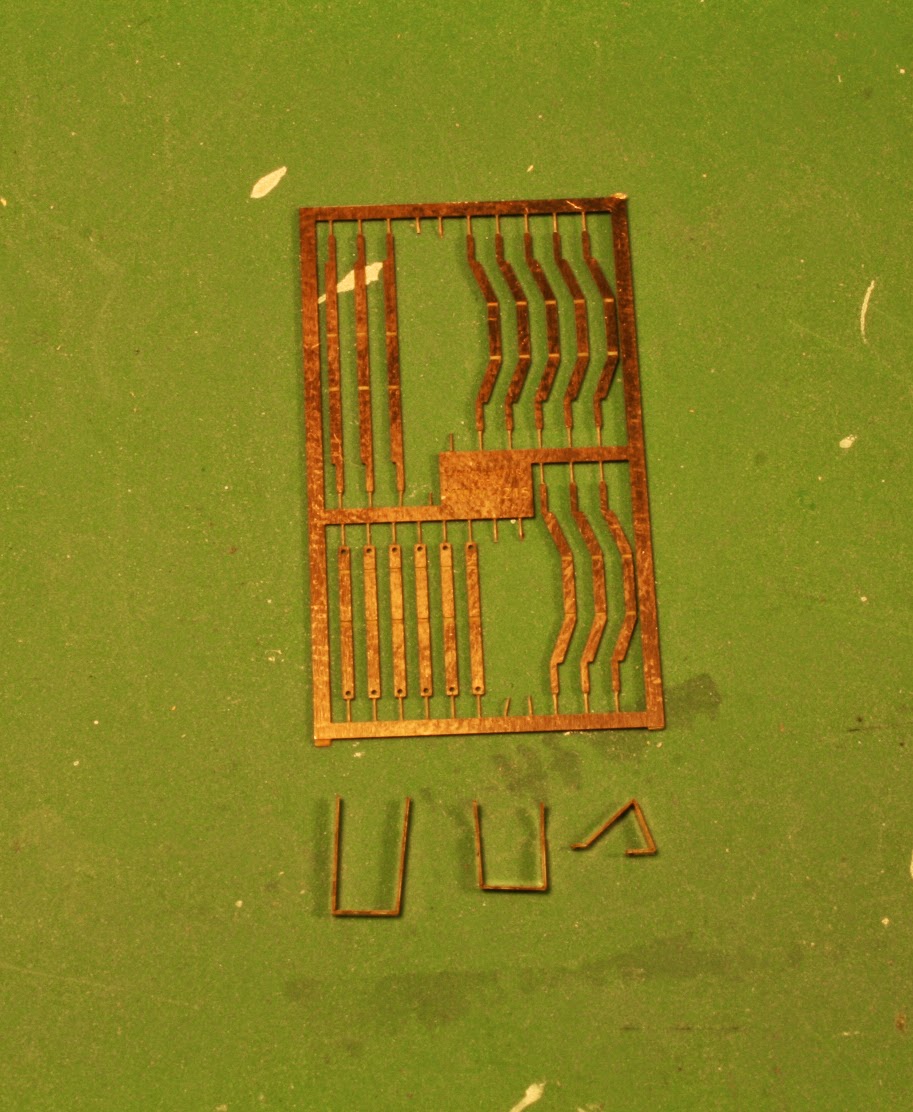 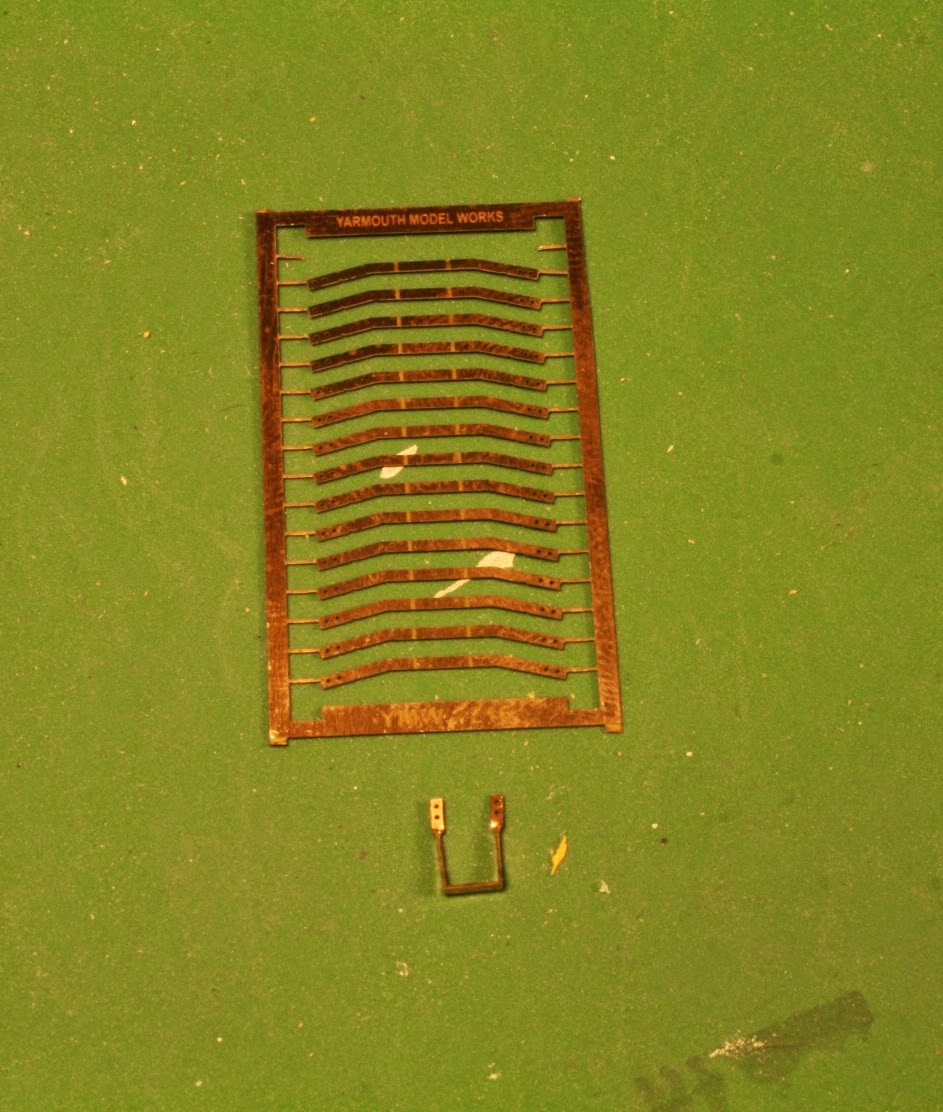 These are currently in inventory. More styles of running boards are forthcoming.
Ordering information is on the website,  http://yarmouthmodelworks.com/details.php

It's time to share I guess.
We've been hard at work in the Yarmouth Model Works shops developing the roof and end for the AC&F proprietary parts.
The test print of the end and roof are here for your pleasure. 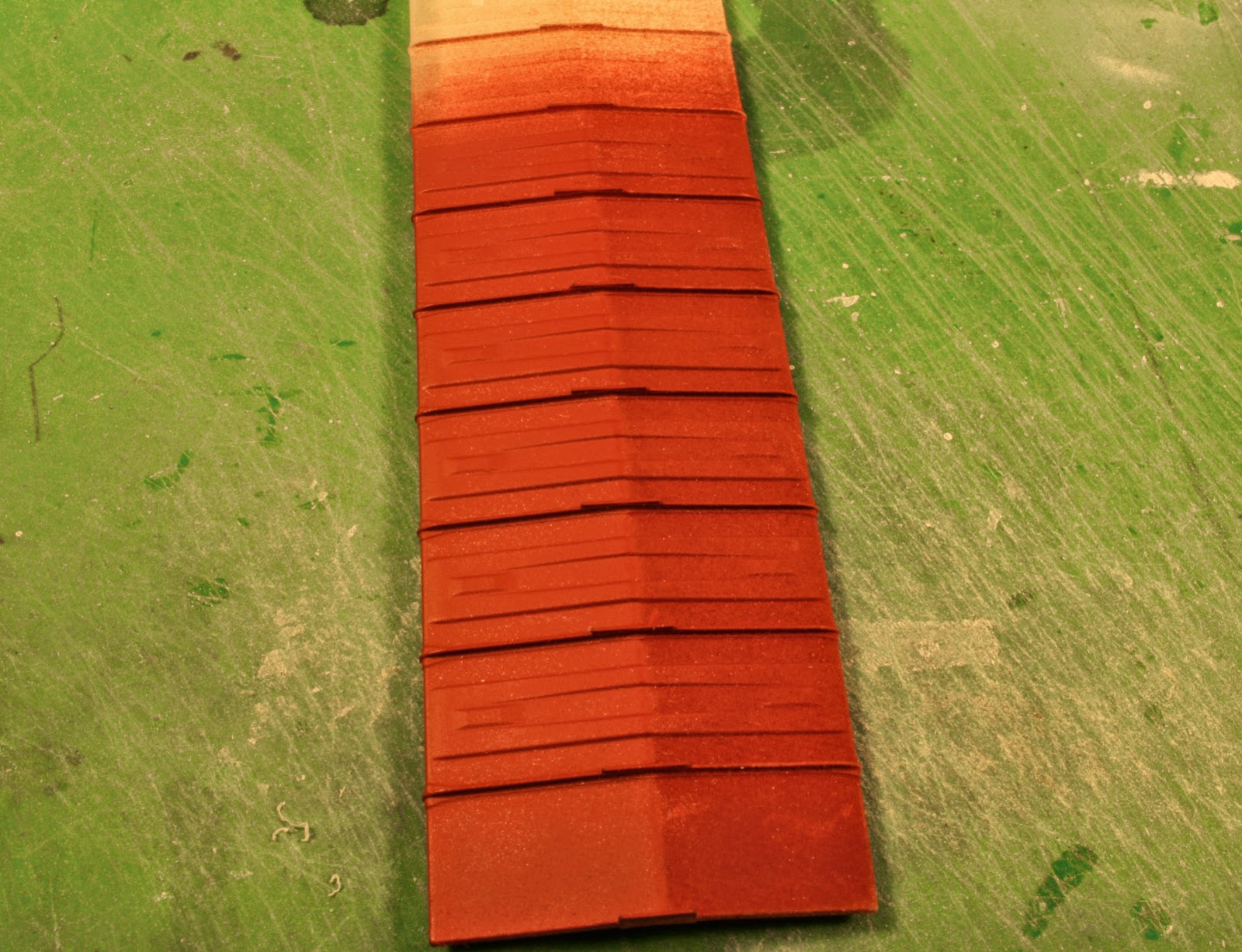 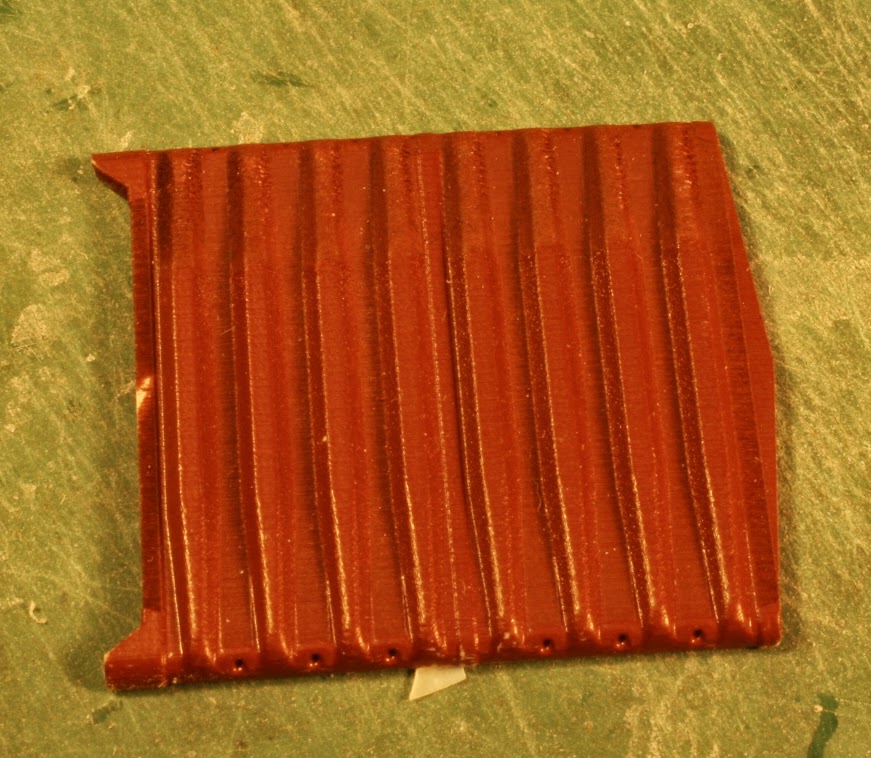 These are test prints from Shapeways that we used to prove the drafting work. They will now go off to a higher resolution printer to generate the actual casting patterns.
This is some of the cars we hope to offer in the future using these parts.

We're at least a year away from production, but I'm very excited at the prospect of offering these cars.
While you're waiting enjoy this image of an AC&F built boxcar. 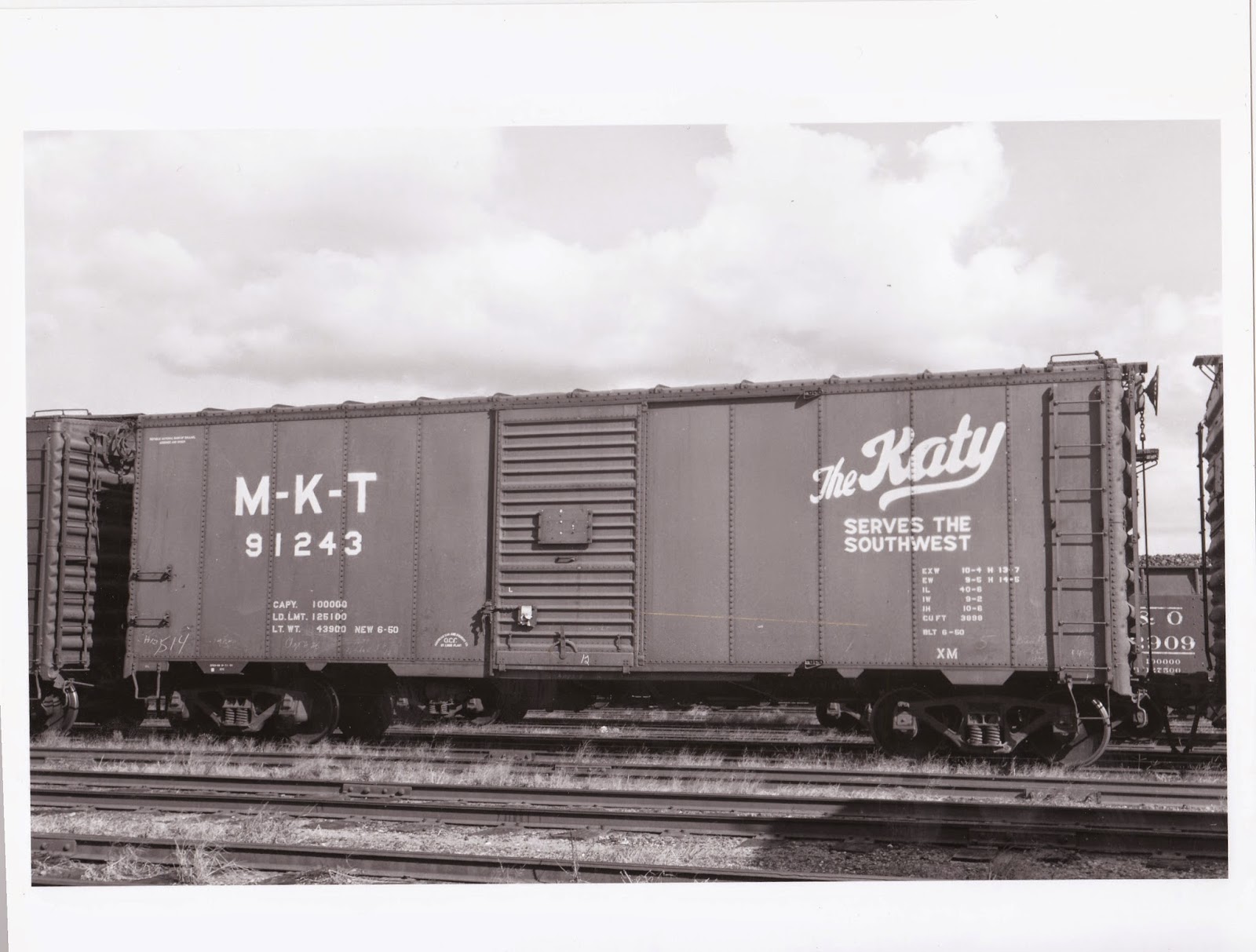 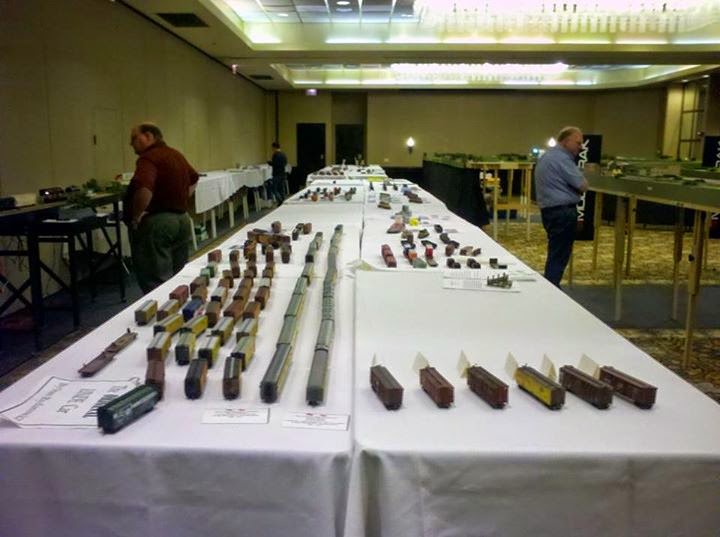 Every fall the movement of a certain type creature begins in early October. It is unlike any other migration recorded. The stirrings begin in American Northeast, followed by activity on the Pacific Coast. Soon there is movement from the Southern Mid-West, the Northern Plains, from as far south as the Florida Peninsula, from out in the Southern Pacific Ocean and from Canadian provinces.
It is not a movement south to warmer climes, but rather a concentration in an unremarkable suburb of Chicago. The annual Prototype Modelers Meet in Naperville.(Technically Lisle).
Who are these creatures who make this trek? They are some of the best model railroaders in North America. They come together to share knowledge, experiences and comradeship. They come together to share adult beverages and mourn friends who have passed on. They look to see what new products are being offered by the manufacturers who help enable their interests.
Some spend hours flipping through the enormous collections of railroad oriented photographs that have been hauled partway across the continent. Invariably some previously unknown treasure is turned up, or some obscure bit of detail is confirmed, but more often , yet another question is raised about the glory days of railroading in North America.
Old friendships are renewed and new ones are made. Faces are connected to names that have only been seen on the internet.
Modelers approach manufacturers with suggestions about cars to model. Usually with photos, drawings and other important data in hand.
And then there’s the display room. Tables of beautifully rendered models, covering many eras and prototype railroads. Brought, not to be judged, but to be shared and to hopefully inspire others to greatness.
And the sheer joy of it all. My roommate for the 4 days told me he’d laughed more in the last 4 days than in the last 4 months. It’s hard to not be happy when surrounded by so many like minded people.
It’s over another year, the travelers have returned home. Already planning for next year’s return. Check your calendar for the 3rd weekend in October and consider making the trek, (pilgrimage?), to Naperville.
I plan to be there.
No comments:

Is there anything more "Railroady" than...

I think not.
These 4 reefers are Sunshine kits that just got finished and are on their way to their new home.
I know the client will enjoy these as much as I enjoyed building them. The multi-coloured paint jobs make these kits a nice diversion from basic boxcars. As they are flat cast kits, it's easy to get the colour separations. Build and detail the ends, roofs and sides separately, paint and then final assemble. Saves so much masking tape and I don't like masking.
Now to pack for the annual trek to Naperville/Lisle. So looking forward to seeing all the usual suspects and maybe making some new friends.

A rare and beautiful thing 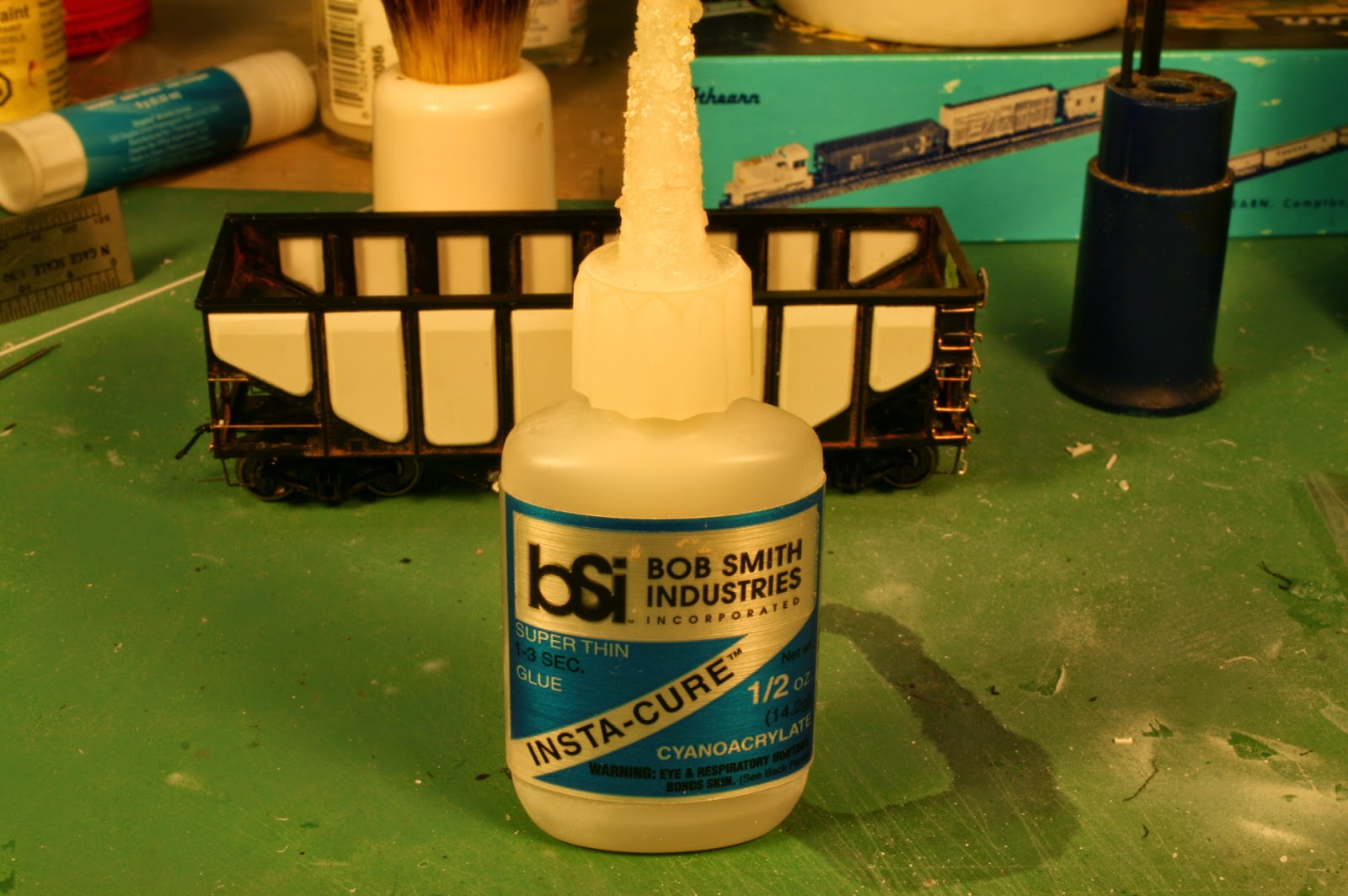 An actual empty CA bottle!
You'd think that around here this would happen more often. Sadly no. Usually I get 2/3rds of the way through a bottle and it starts to show signs of being done.
Not this time.
It does make me wonder. Where would we be without this wonder adhesive?

And speaking of old boxes.

When was the last time you had an Athearn "Blue Box" on the bench? 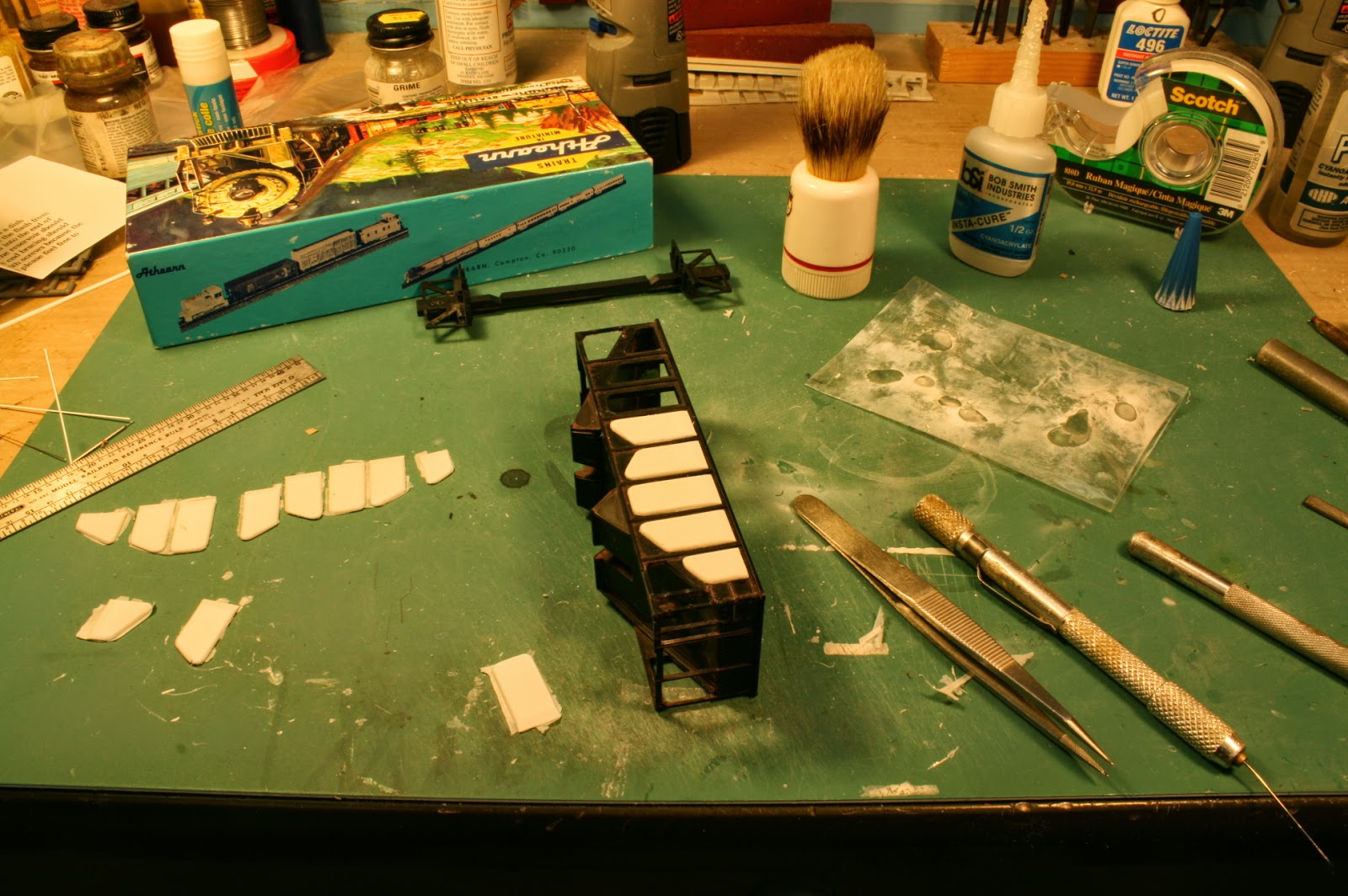 Today I dealt with this project for a client.
An Athearn hopper that has had the side panels cut out with a laser and cast resin panels added to replicate the stampings that were used to increase the internal capacity of these coal haulers.
This kit came from Stan Rydarowicz. He offers both Ann Arbor and Wabash panel side hoppers.
The other big part of this job was slicing off all the cast on grabs and replacing them with wire.
Sort of trip back in the ole Wayback Machine. I was remembering upgrading details on Athearn cars back in the early '80s just before IMWX came out with their stunning 40' boxcars. Thus started my descent into the madness of prototype modeling. Shortly after the IMWX kit came out Stafford Swain made available all the Canadian roofs and ends. For me the die was cast.
Anyway this little project is now ready for the paint shop, just as soon as I move the 4 multi-coloured reefers out. That'll be tomorrow. 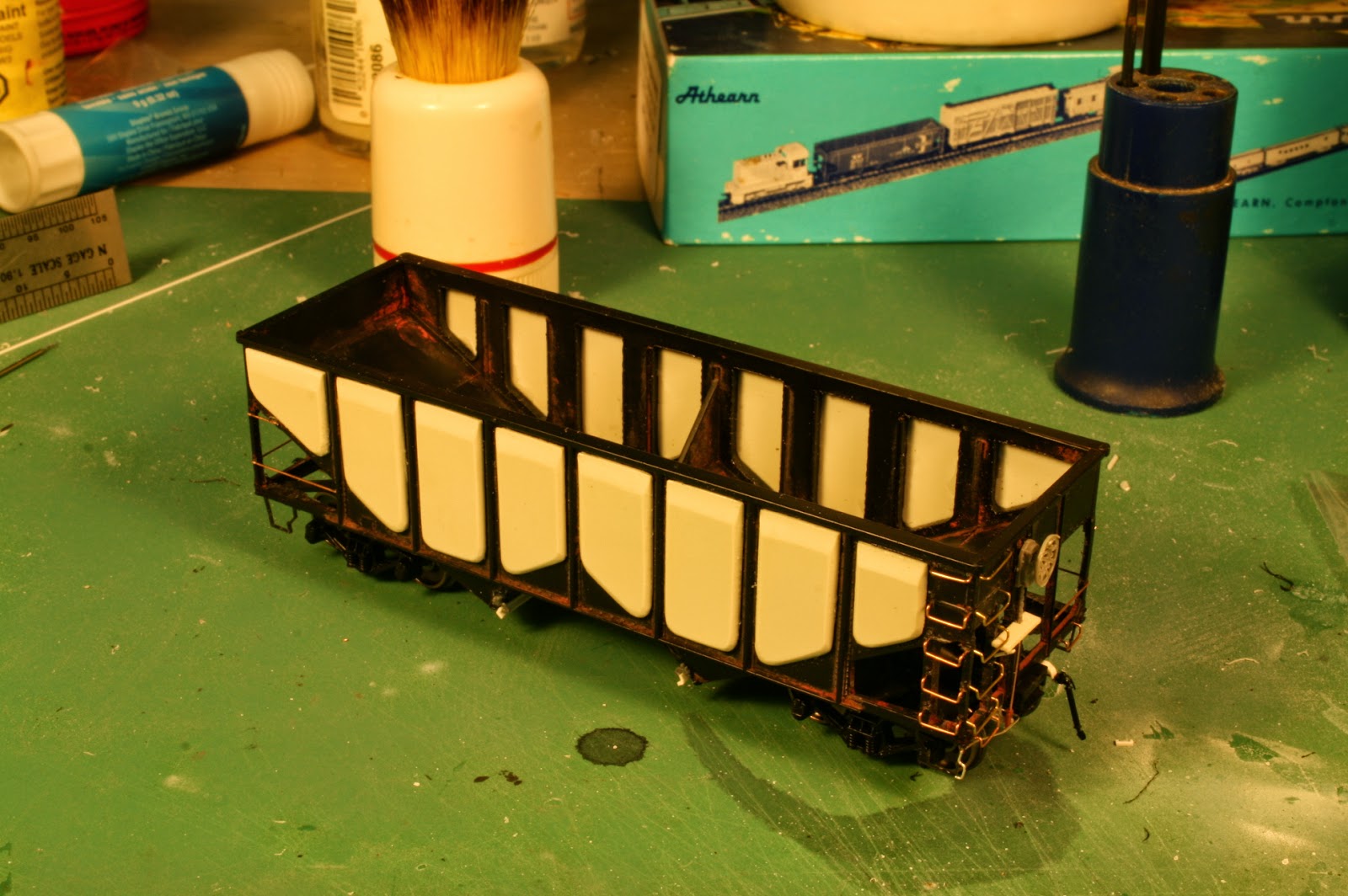 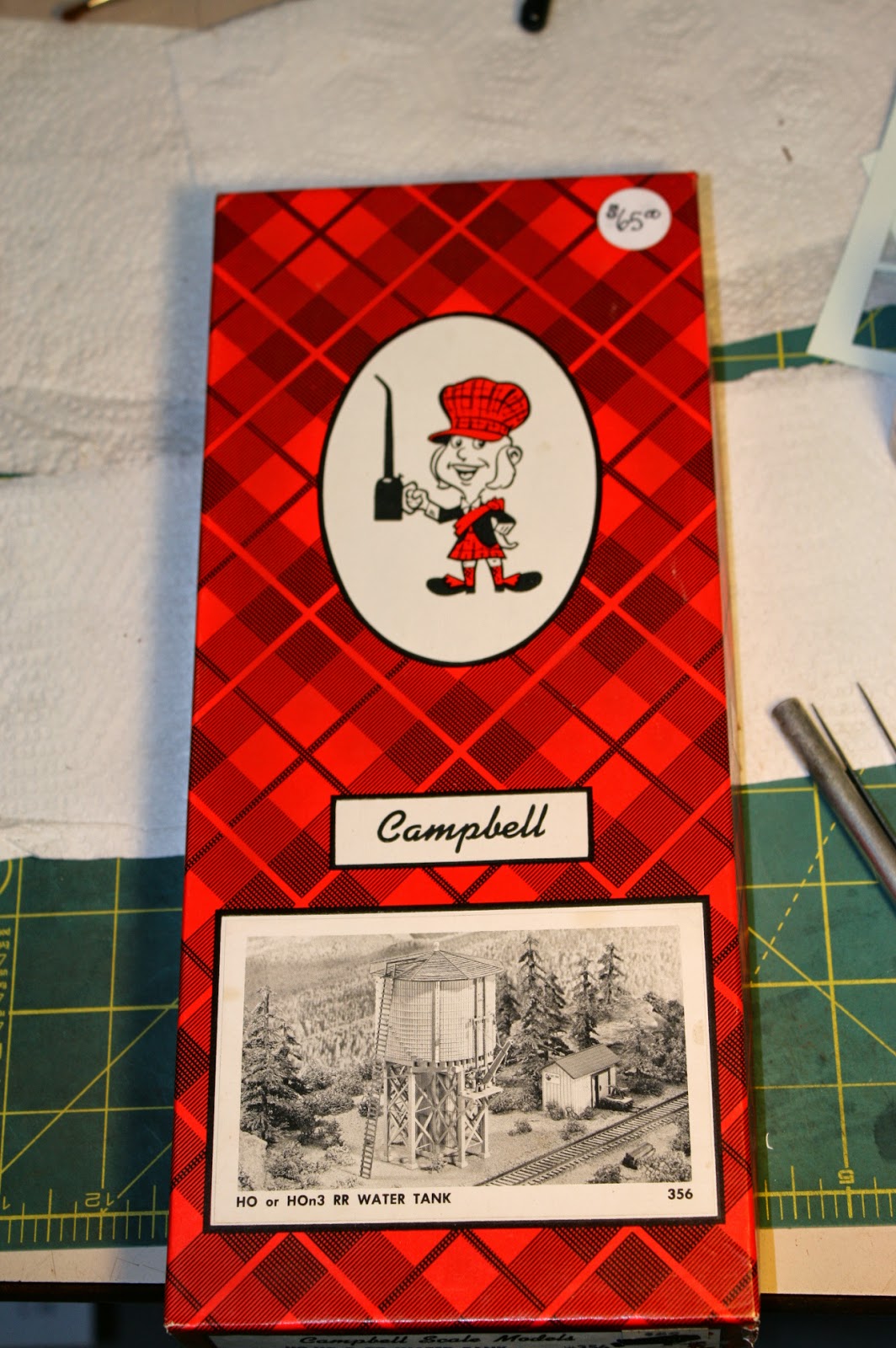 When I started getting "serious" about model railroading, way back in the '70s, these guys were top of the heap. I remember leafing through Walthers catalogues and being agog at the presentation models Campbell showed. Truly inspiring.
And when I could finally scrape up the cash for one of these kits, they did not disappoint. Precision milled wood, excellent instructions and drawing/templates. A little care and concern, and very nice models resulted.
And Campbell is still with us today. Remarkable. No laser cutting, no peel and stick. Traditional model kit building at it's best.
I need a water tank for the town of Simcoe. CNR had a tank just north of the main that fed a water plug that was between the main and the passing track. I looked online for awhile and I kept coming back to the Campbell kit. The proportions were what I wanted and I knew that the level of weathering I wanted would be easier on a wooden kit.
Here's the result. 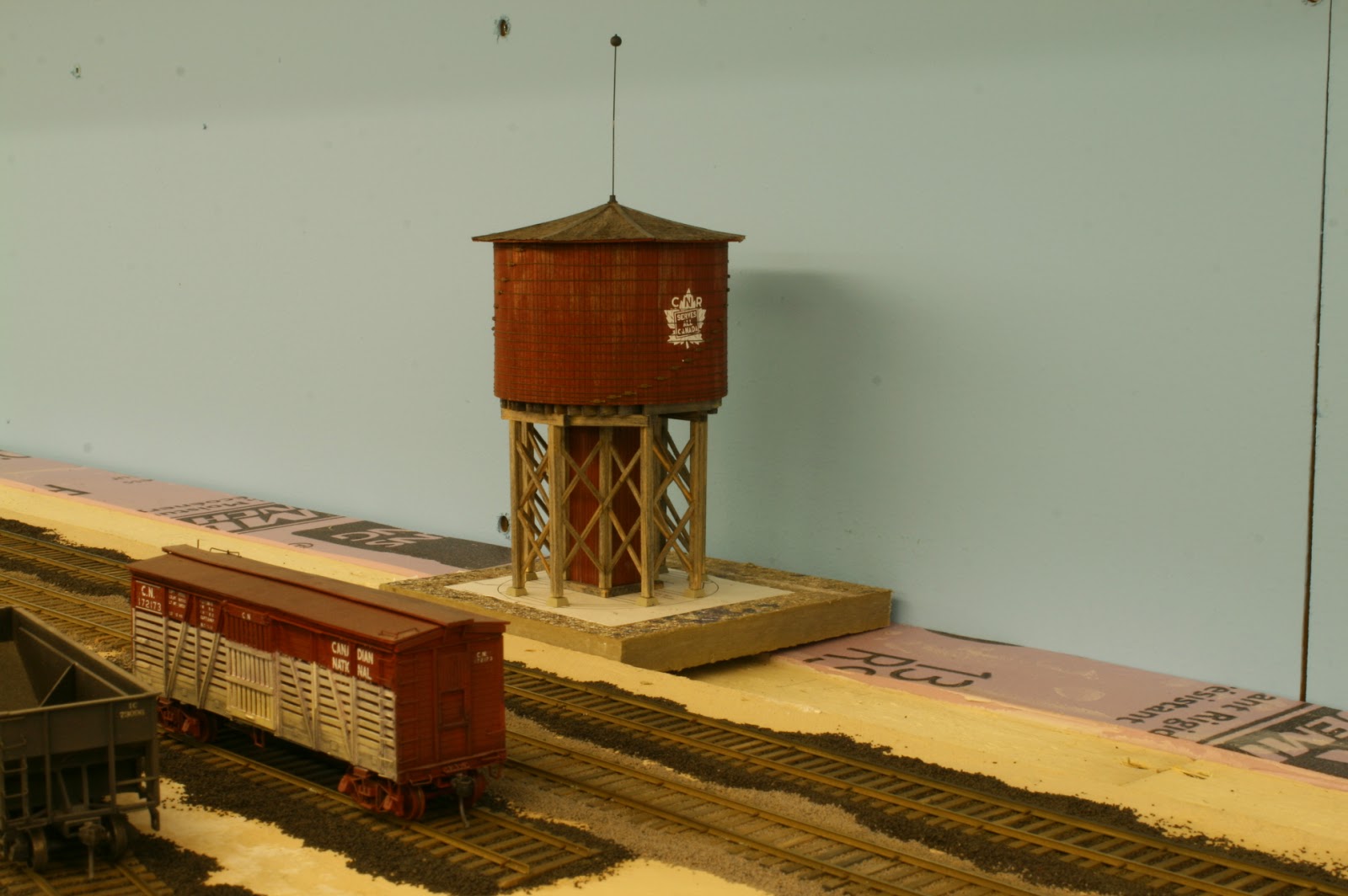 The tank and frost box were painted with thinned CN Red #11 with an undercoat of wood stain for that hard at work look. The legs and braces were just washed with tie stain. I added the white maple leafs to help tell the story. It's CN owned trackage and infrastructure, with the Wabash having running rights. The prototype didn't have heralds on it but other tanks in the province did and I like the appearance.
Once the scenery crew comes through Simcoe I'll "green" the base and then secure the tank in place. A very pleasant build.