That looks a little better

A little scene that I am working on for the layout is a pile trestle that crosses a small water course.
Here's the prototype inspiration. 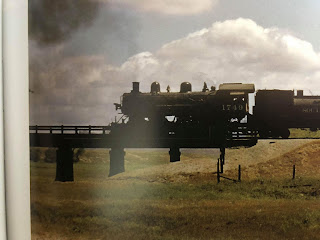 I used 2 of the good ole Campbell Scale Models "Ballasted Deck Pile Trestle" kits to create a bridge of a more accurate length.

But after I built it and installed it on the layout, I realized that the retaining walls at the ends had a ridiculously steep angle of repose for the back fill. 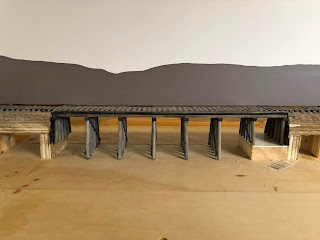 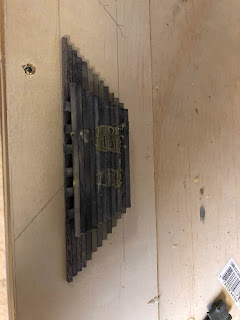 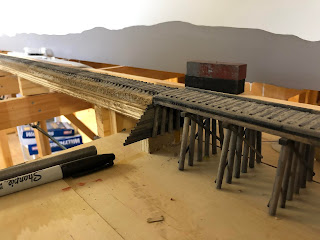 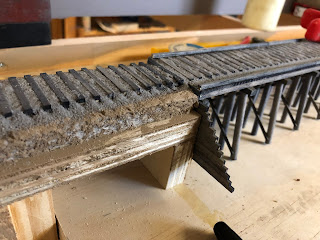 That looks a little more realistic!

Well here they are,
4 SP '37 AAR design boxcars.
Assembled, painted, weathered and on the layout. 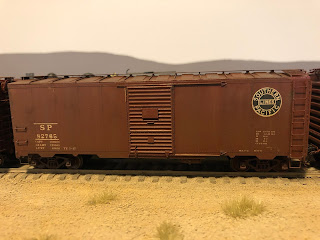 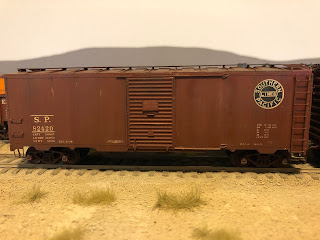 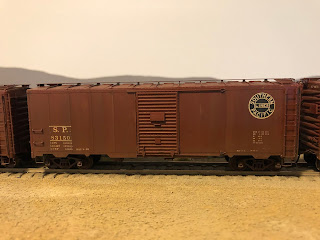 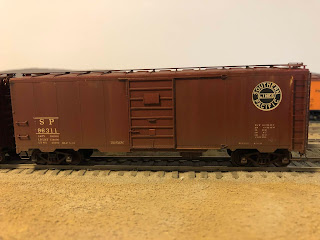 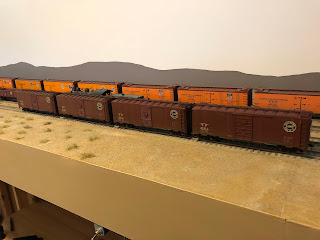 I used Speedwitch Media's SP boxcar set, love Ted's decals!
The weathering is AK Interactive enamel washes and streaking effects, followed by oversprays of dirt and grime colours.
I have a number of the square corner post cars coming to me later this summer, so I'll be doing up those in the same manner.

As I alluded to in a previous post, https://elgincarshops.blogspot.com/2019/05/wandering-down-tulare-ave.html , I've been working away at Tulare Ave and I now offer up a photo sequence and description of the steps I took to create this 28' of roadway.
I couldn't determine at the outset if the road surface was concrete or asphalt, so I made an assumption that it's concrete, knowing that having said that someone will come along and prove to me that it's asphalt.
The starting point was determining how to deal with the stretch of road that had trackage down the middle.
I decided to use 0.060" styrene as the road surface, which matches the code 70 rail I use nicely, leaving the rail head just proud of the road surface, so I can clean rails without removing paint from the road.
The stretch of track under the road was given 1/2 the number ties as I would normally use. 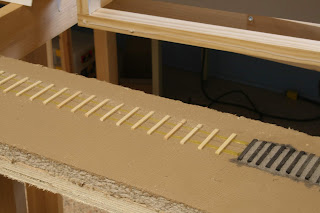 Next I cut a strip of styrene the width of the roadway and pinned it in place giving me a straight edge to press the rail against, thus insuring a dead straight section of track. Critical for the appearance I was after. 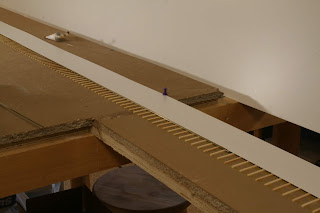 The rail is secured in place by running a bead of Pliobond along the underside of the rail base. 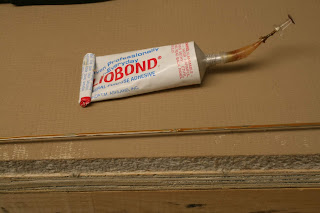 And once the solvent has flashed off, the rail is positioned and a hot soldering iron is moved along the rail, reactivating the adhesive and once it's cooled in place a very solid bond is created.
I use the handle of an old file to hold the rail in place as I move along down the length of the rail. 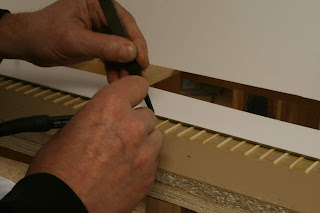 The other rail is secured in the same manner and carefully gauged as we proceed down the over 8' of track that is in the road. 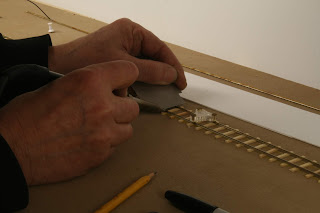 With the rail in place, the 2 outside strips of roadway are cut to width and an additional strip is glued underneath to match the tie thickness. The 2 sections are glued to the scenery base and the ties using Welbond. My go to glue for this kinda thing. 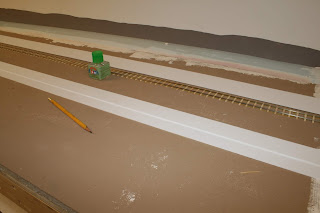 Then comes the tricky bit, fitting the road surface to the curve in the track.
I carefully made a paper rubbing of the curve and traced it onto the styrene.
A little bit of fiddling and sanding was required but both the outside and inside bits I got right the first time. Huzza! 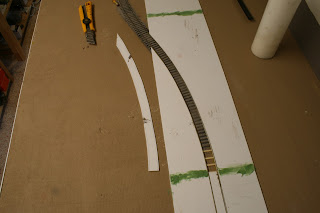 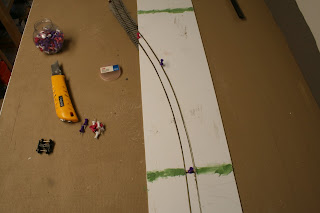 Once that hard bit was done the rest of the roadways for the area were cut and installed,
Everything is 2 layers of 0.060" styrene.
The actual crossings will be wood, but those are last after all the road work is done. 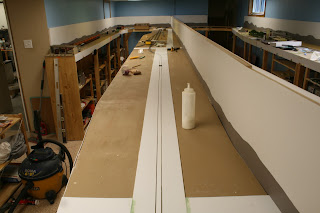 All the joints were filled and sanded smooth, and then I came along and scribed expansion joints every 15 scale feet. 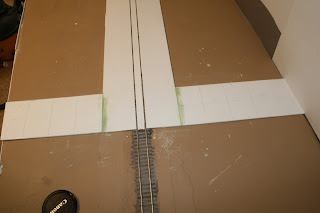 A primer coat of Tamiya greys was applied. 3 bottles of Tamiya to cover it all! 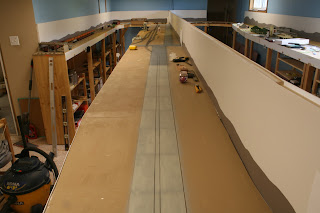 After some experimenting I mixed a colour for the concrete that I was happy with.
2/3 Vallejo Deck Tan and 1/3 Vallejo Medium grey. It's a close match to the Scalecoat "aged concrete".
Wasn't about to spray that much Scalecoat in the house.
Divorce would ensue. 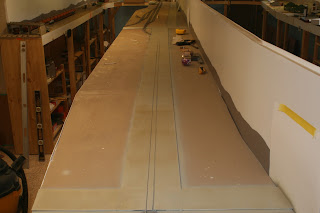 Over that clear flat was sprayed, and once that had dried we were ready for weathering.
Using Pan Pastels, black and various greys the road surface was "dirtied".
I had some odd blotches at first, not sure why, but soon I had a process that was giving me the desired results.
I will likely revisit/repaint the blotchy areas in another couple of days, I need to look at it again. 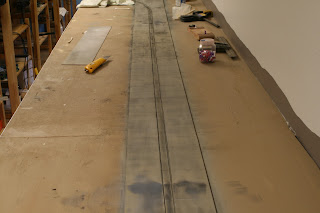 Overall, I'm pleased at how this has turned out, now to fill the sides of the roads with houses and such.
But first I have to get ready for the New England RPM in less than 2 weeks.
Maybe we'll see you there.

4 for the home team

It's a long weekend up here in the Great White North, which allows me to spend a couple of days focusing on my own projects for a change.
I've managed to put the finishing touches on 4 '37 AAR design boxcars for my SP fleet.
I took IMWX/Red Caboose 40' boxcars and went to town on them. 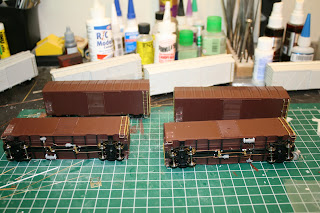 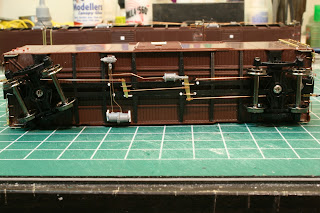 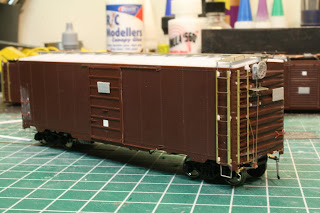 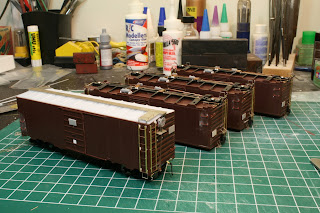 I plugged all the holes in the bodies with styrene rod,
Replaced the brake gear with Tichy components and used my own etched brake levers
Upgraded many of the body details with etched parts, sill steps, ladders, brake step, cut lever bracket, airhose bracket, running boards. The tack boards are resin parts. Most of the parts used arte from my own product line.
I'll be using Speedwitch Media SP boxcar decals, once the paint has fully cured.
Looking forward to seeing these done and on the rails.
No comments: 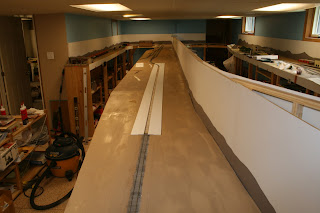 What we have here is another 40' of mainline and associated trackage laid in place.
Within a few days the main will be laid around the 180 degree curve behind the camera and the last stretch down the other side of the peninsula can be worked on, which will result , finally, in the ends getting connected.
The major visual feature of this side of the peninsula is the street running the line takes down the middle of Tulare Ave.
The 2 long strips of styrene are the beginnings of the roadway.
In the model it will terminate where the styrene ends in the foreground and it will extend away from the camera for about another 12 real feet once I'm done.
This is the kind of thing I'm going for; 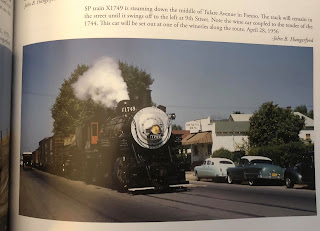 I gave a lot of thought as to how I was going to tackle the roadway, and I'll be doing a full blog post on the process once I'm further along and confident that I'm having success.
If I'm not running trains by the end of the summer, I'll have done something wrong!