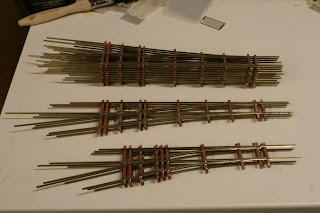 Yep! A nice little pile o turnouts.
Can't ever say enough good things about our friends at Fast Tracks.
The jigs, fixtures and tools that have been created by Tim have made building turnouts and other track elements an absolute joy.
Now all I have to do is paint the pc board ties and add feeder wires and these bad boys will be ready to install.
Of course, I have to ballast all that Aylmer trackage first

Language is a funny thing

1.
a discoloration produced by foreign matter having penetrated into or chemically reacted with a material; a spot not easily removed.
2.
a natural spot or patch of color different from that of the basic color, as on the body of an animal.
3.
a cause of reproach; stigma; blemish:
a stain on one's reputation.
4.
coloration produced by a dye that penetrates a substance, as wood.
5.
a dye made into a solution for coloring woods, textiles, etc.
6.
a reagent or dye used in treating a specimen for microscopic examination. 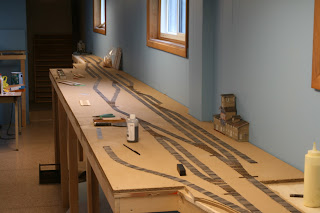 In this case I choose #4.
There you have it. All the ties in Aylmer are stained. We're now ready for the initial application of ballast.
By following this order of steps I avoid gluing points shut on the turnouts. A huge plus for me. I'll have to turn my attention to the backdrop soon. Good thing that goes quick.
No comments:

I get asked a lot about how I can build models all day for others and not burnout or neglect my own projects. Well it's not easy, but every now and then I just switch off the custom building and focus on my own stuff.
The last week as been a good example. Before and after the St Louis RPM I was quite busy with a show at the arena and very little model train work got done at all. I was planning on returning to the workbench Monday after we had loaded the Ice Age show onto it's trucks Sunday evening. But I got a "Help me" call from TrainMasters TV. A planned guest called in sick and a quick replacement was needed. So there went Monday. In fact with all the driving to and from the studio and the stress from throwing together a quick few episodes, there went Tuesday as well.
So instead of trying to focus on resin projects I had a few days of me time. 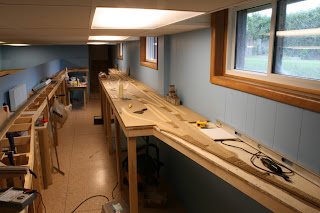 All the ties are now in place in Aylmer.
And in between setting up strips of ties, I  fiddled with some modular wall sections to create a factory for St Thomas. I'll tell more about that once I have more progress accomplished.
With the ties glued in they're ready for sanding and staining. I've also been taking mental pictures of where all the structures are going to go. It's been a very useful exercise.
With the sense of accomplishment I now have, I'm feeling a little more energized and ready to get back to the work bench and take care of my customers needs.

Sometimes it's just finding the right person to ask.

There are days when I feel like I'm really meant to model this chunk of the Wabash/CN lines.
It takes time but slowly the little mysteries are being revealed to me.

While drawing out the track plan for Aylmer, using the survey as a major guide, I noticed that there's this little spur in the middle of the yard limits, just north of the freight shed. 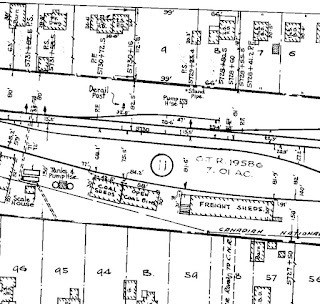 As you can see there's no structure associated. Just a pump house and a stand pipe. And maybe long enough for 2-3 cars. Curious.
We know that the railroads don't leave spurs in place for entertainment value. Track switches mean maintenance and possible derailments. If the railroads could find a way they'd do without them all together.
So why is this spur there? Particularly since the team track is just across the main.
This is where my friend Bill comes into the scene. Bill used to work in Imperial Tobacco and is a long time resident of Aylmer. In fact he grew up across the street from the canning plant that is served by the railroad.
I gave Bill a copy of the survey and and asked him to pick the brains of his friends and neighbors.
Bill came back with an interesting answer for me.
Turns out that this spur was used for loading apples onto boxcars. Just to the west of the yard were a couple of good sized orchards. And in the off season occasionally the tobacco plant would use that spur for holding cars.
Not something I would have guessed.
It still leaves me wondering why the team tracks weren't used. But there had to be a reason. Maybe I'll figure that one out one day.
One mystery at a time.
3 comments:

It's been a chaotic week. We have the final week of rehearsals for Ice Age on Ice this week, so my schedule is all over the place.
But with most mornings off, I've been making a little sawdust. 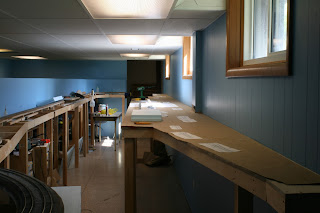 As a result all the benchwork for Aylmer proper is now in place.
Construction is my usual boxframe of 1x3 pine with 5/8" fir ply on top. It could have all been done in one day but other tasks called me away. Instead this was stretched out over 4 days.
The brown paper track plan is now laid back in place for a final review.
Next week I'll have to go and buy 3 sheets of Homasote for this scene and then it'll be ties, ties and more ties. Good thing that I restocked from my friends at Mount Albert Scale Lumber. This town will likely eat up almost as many ties as the St Thomas yard did.
Now that I'm over on this side of the room, I've also realized that curtains are needed. The glare from the morning sun is unbearable and won't be good for any of the models. So as I write this, the "Boss" is shopping for cheap drape material.

As a result of the great support of the Semet-Solvay tank car project, as witnessed by the quick sale of the first 50, I have decided to produce 25 more kits.

It will take a few weeks for all the components to be rounded up and inserted into boxes. The intention is to have a few kits at the Chicagoland RPM. You may all remember it as Naperville or Lisle.
So if you missed the first round, get your request in soon. It's first come first served.

See you on St Looey!

Well Collinsville, IL to be accurate, but it is called the St Louis RPM.
I'll be leaving here in the morning, bright and squirrely for a 12 hour jaunt down the highway.
Very much looking forward to seeing all those familiar faces and , with any luck, making a few new friends.
The RPMs is what it's all about these days for me. A gaggle of like minded modelers who are amongst some of the best that North America has to offer. I spend hours just perusing the display tables.
Say hi, when we meet.
No comments:

And then there were 5

Finally a day off!
We've been in deep dark Ice Age on Ice at the arena for over 2 weeks now. Which has kept me away from the work bench. But now with a partial day off, I've been able to complete this project.
A quintet of SFRD reefers.

Lovely older Sunshine kits. The client provided exact spec sheets for numbers, slogans and other lettering data.
I'm really pleased with how they've turned out.
Given that reefers were generally well maintained and repainted more frequently than run of the mill boxcars, the weathering is a little subdued. I took a little time and perused a number of prototype images to assure myself that the I wanted to avoid over-weathering these cars.
So they all got a light overspray of base car colour, an overspray of greyish grime, the black surfaces were toned down with an overspray of grimy black and finally the ends got a suggestion of wheel spit with rail brown.
Now to box them up and onto the next project.