Another Blast from the Past 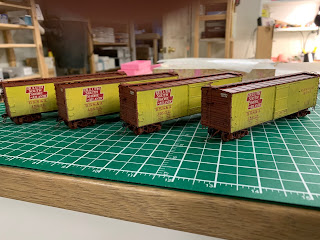 These kits were originally manufactured back in 1985! The pattern work is has good as anything we've seen since.
Mind you they are the old metal filled epoxy castings, which are the killers of drill bits, but the detail is fantastic.
The only real concern I had was with the old dry decals, which is where Microscale Liquid Decal film comes to the rescue. The decals will coated with a layer of the film and left to dry. NO splitting or shattering of the decals as a result. Phew.

The DSS&A yellow and red scheme for Merchandise Service is quite striking. Until these were sent to me to build I had no idea of these cars.
So yeah, they were fun to build and finish. Nice way to start the year.
And even after all these decades, we can still say, "Well done Mr Storzek"