It maybe hard to believe, but after decades of removal of rail and rail infrastructure, track is again being laid in St Thomas, ON.
The "death spiral" began in the 80s when C&O pulled out of Canada and removed all of their track and demolished the facilities that used to exist in the south end of town, including the steel trestle that crossed the Kettle Creek valley.
Shortly there after the slow, painful destruction of the Canada Southern, with chunks of the right of way being lifted at different times. And the prolonged struggle between Elgin County Railroad Museum and CN/CP to acquire ownership of the old erecting shop to house the museum and it's collection.
More recently chunks of the old Air Line, formerly the Wabash/CN mainline connecting Windsor to Fort Eire, were lifted. Fortunately there is still activity on part of this line, between St Thomas and Delhi. But everything east of Delhi is long gone.
At some point, unknown to me when, the mainline of the old L&PS was removed through the centre of town. From the 3 way switch at Barwick St, south to the interchange between the L&PS and the CASO.
It is this track that is being replaced. At least most of it.
The city has decided to fund the restoration of the L&PS right of way in the centre of town along with a new replica of the original L&PS station. Work is well underway and we should be able to see the first trains from Port Stanley arriving in downtown St Thomas in a couple of months. A future reconnection to the remaining mainline to London is hoped for, but remains a protracted debate with CN.
Politics aside it's neat to watch rail heritage being restored. 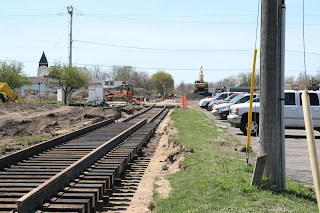 Looking south with the original roadbed of the CASO at the orange markers. How's that for a piece of Snap Track? 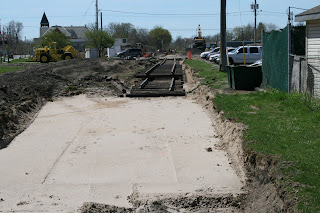 Now that's subroadbed! No Homasote for these cats. 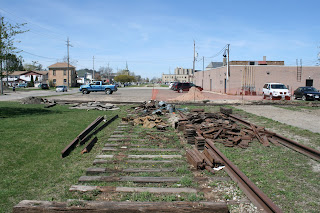 Standing on what's left of the CASO, looking west, with the LP&S track just in front of us. 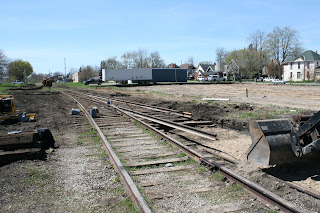 The new switch which will allow trains to either head north to the station or east into the old CASO shop grounds, now home to the Elgin County Railway Museum. 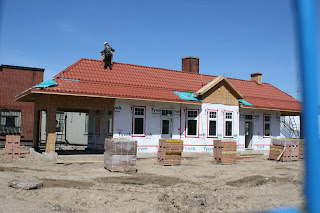 I'm very much looking forward to seeing this little gem finished.
Now if someone would fund a steam train in town, we'd be all set.

That is SO cool!