A bit of a mystery

I have a bit of a mystery on my hands.
I have been unable to date, to find any photos of the Aylmer station, other than 2 very small ones from the turn of 19th century.
I do have a drawing from National Archives of the station and a proposed addition of an express room dated 1920. It was a sizable station, similar in size to the Jarvis station further east. 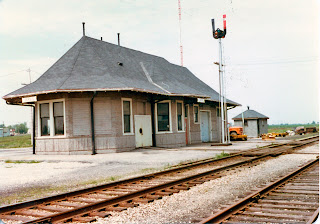 Then , through the good graces of a friend who desires to be anonymous, I was given a copy of a real estate map dated 1948 which is marked "No station". And the train order board was relocated to adjacent an elevated crossing tower. The station was located just to the west of where the real estate map shows the tower and train order board.
Also the Employee Timetables I have all show Aylmer as a 24 hour train order office, which leads one to believe that the operator worked out of the crossing tower.
But the big question for me, is when did the station burn down? That's the only situation that fits the circumstance. The search is on with various agencies. I'm hoping that the station was lost close to my modeling date, 1951, so I can model just the footings. Could be really neat.