That was some kind of fun 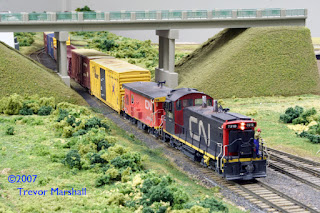 My good friend, Trevor Marshall, posted the following on his blog today. The whole project was fun.


I read something online today that reminded me of one of my favourite memories in the hobby and I thought I'd share it here.
Back in 2006 my friend Pierre Oliver and I knew each other and knew we travelled well together, but we had not worked on any hobby projects. Then we got to talking and realized we were both intrigued by the Free-mo modular standard, and decided to build a module.
We knew of no other Free-mo enthusiasts in the area (although the S Scale Workshop, of which I was not yet a member, was using a standard developed from the same principles). So we saw this as an opportunity to introduce Free-mo to Southern Ontario modellers. But we also knew that any module we built would also have to stand on its own as an exhibition layout, in case nobody else was interested.
We wanted to do something that really showed off the free-form nature of Free-mo and realized one of its strengths is the ability to replicate prototype locations, in a way that other modular forms cannot. This is because with Free-mo, the benchwork can follow the track - including a prototype track arrangement. Other systems force the modeller to work with restrictive modular specifications that make it difficult to capture the feel of most real places.
Pierre and I looked for several candidates and settled on a small yard and adjacent industrial park in Peterborough, Ontario. The result was The Peterboro Project ("Peterboro" is how the CNR spelled it). This module consisted of a dozen sections, each a maximum of 60 inches long by 18 inches deep. In total, we had about 50 feet of module: about 27 feet represented the through route, with the balance on a number of peninsulas - including one about 12 feet long which in turn supported its own peninsula. Pierre hand laid the turnouts and produced some great freight cars for the layout. I scratch-built many of the structures.
We created two adapters that flared the ends out to the standard Free-mo modular width of 24 inches, so we could connect to other modules. But when set up in exhibition mode, we left these at home and attached a five-track sector plate to one end of the through route. We could then operate the module as a sprawling switching layout. Here's a plan of the module as an exhibition layout.
Peterboro's debut was a Free-mo rally hosted by the Rochester Institute of Technology Model Railroad Club in the fall of 2006. Pierre and I had a great time but this was the module's only Free-mo appearance. We exhibited it as a stand alone layout thereafter. (We had no problems with Free-mo - we just didn't have any additional Free-mo opportunities.)
The module was featured in the August 2008 issue of Railroad Model Craftsman magazine – and then Pierre and I sold it off to move on to other home layout and modular layout projects.
I took photos in the workshop and at a number of events, including exhibition set-ups at a customer appreciation day and barbecue hosted by Toronto-area hobby shop George's Trains, and at the 2007 Toronto Christmas Train Show. And I took some rail fan photos to help illustrate the article in RMC.
As should be obvious from these pictures, Peterboro was never "finished" - we planned to add trees, people and details, and the module could've benefited from some additional attention paid to presentation: skirting would've been nice. But even as exhibited in its "work in progress" state, The Peterboro Project received a lot of positive comments, and it's gratifying to see a number of groups that now use Free-mo or Free-mo inspired standards in Southern Ontario. I wouldn't say we introduced the concept, but we certainly gave it a push.
I learned a lot through the Peterboro exercise - especially some tricks that are invaluable when building a layout that needs to survive hours of bouncing and bashing in the back of a vehicle. I also learned that I really like sector plates for staging - something I continue to use today.
But the best part is Pierre and I spent a lot of time in the workshop together in the summer of 2006 to build Peterboro. And along the way we became really good friends. While Peterboro is now someone else's, the friendship continues stronger than ever. And we can make each other crack up by saying things like "It's a co-op!", which not even our wives understand.
I'm really glad we built The Peterboro Project.