Making the roundy go round!

I've made good progress this weekend past on the roundhouse and turntable for the St Thomas yard.
From what I can tell from various photos and surveys, the turntable was a standard Grand Trunk 72' unit. Similar to the ones in Palmerston, Simcoe and other locations that didn't need upgrade for longer locomotives.
I have only one photo that shows most of the bridge side; 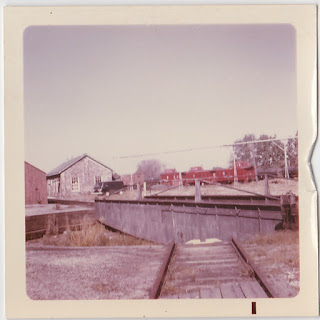 Not sure of the date, but the van and the red N&W cabooses help set a time frame.
Older photos show that the queenposts and tension rods were a later addition. Possibly to handle the weight of the Wabash K-1 mikes. Certainly not for the K-3 mikes has they were too long for the turntable. They didn't need turning at St Thomas anyway while in normal service. They kept going straight through. If they did need turning there was always the wye.
The turntable started as Diamond Scale 75' item. And I simply added 2 plate girder sides to the kit supplied bridge. I'll add walkways when I'm sure that I don't need to get into the bridge anymore.
The creation of the girders was simple enough.
I took a piece of 0.030" styrene and cut it to the required length, eyeballed the height and guessed at the curve making sure that it would fit in the pit. 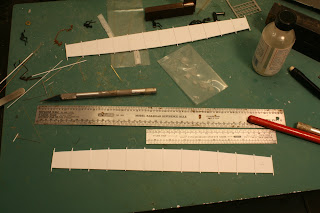 The prototype used angle iron as both stiffeners and splice plates between the panels. I created those by simply glueing scale 1x3 on the flat at about 8' centres, on both sides and then coming back and securing 1x3 as the "web" portion. The whole thing was then wrapped with 1 x 10 material. 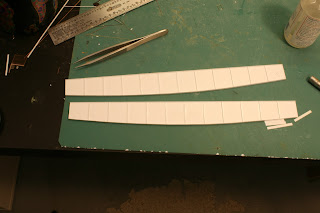 The queenposts are O scale queenposts from Grandt Line and the turnbuckle is an S scale part. The anchors are simply blocks of styrene cut to shape and drilled, with the rod made from 0.019" wire.
The "motor" is an old white metal part I cut out of an old donkey engine casting I've had for 40 years.
It looks the part. 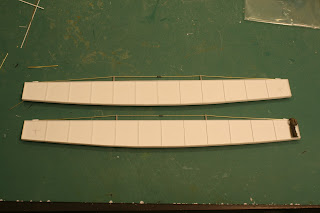 Some paint and a mounting provision and it's secured to the bridge. 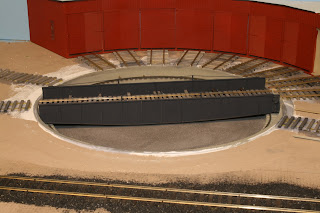 I'll be powering the bridge using the ring rail for one rail and current up the steel centre shaft for the other rail. An auto-reverser will handle polarity.
Now to ballast all that rail and get more ground cover in place.