And the prize for...

The funniest post on the Steam Era Freight Car List ever goes to;
Tom Madden.
For this hilarious bit of fiction revolving around what the new car being worked on at Yarmouth Model Works might be;
There were six of those cars. They belonged to the Canadian National's Mexican subsidiary, CNdeM. Designed by August Ferdinand  Möbius, they were unique in all of North America in having three sides. Side "A" was lettered CANADIAN NATIONAL of MEXICO, side "B", CANADIEN NATIONAL du MEXIQUE, and side "C", CANADIAN NATIONAL de MÉXICO. They were used in sealed, bonded service transporting brightly colored household goods from Mexico to Canada, and monochromatic outdoor furniture on the return trips.

The service was terminated after a particularly tragic event, when several Canadian citizens, fleeing the oppressive ennui of their homeland in search of a new, if not flamboyant, at least less boring, life south of the border(s). died in a sealed boxcar that was inadvertently routed through Chicago. When the car was finally opened, their last, heartbreaking words were found written on one of the inside walls. Those words resonate to this day to citizens of our neighbor to the north seeking something better: "Beige is not a color!"

The six cars were converted to Geometry cars. It's good to see that models will soon be available.

And now that many have figured it out, this is the prototype we're working on; 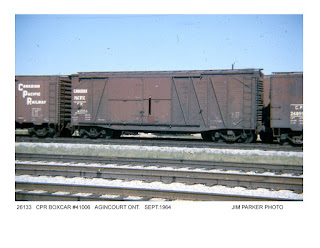 There's no projected release date as yet. Many little things to do. Till then save your shekels. There will be many new freight car models coming within the next year.