Can you spell Tedious?

I can now.
While waiting for the paint to cure on a quintet of SFRD reefers, I decided to work on a personal project.
The DT&I 41'-6" Mill gon. In fact 6 of them. Cause nothing succeeds like excess.
Actually, a significant number of these gons were in autoframe service and no doubt many would have traversed the Cayuga Sub, on the way to the factories in NY state, so half a dozen doesn't seem outrageous to me.
This model was a "Shake and Take" project from the Cocoa Beach RPM in 2010. It takes me time to catch up sometimes. The original project called for chopping up an Athearn gon and creating drop door ends. Most of that work has been solved by Frank Hodina and Tom Madden. Frank did the pattern using a Proto 2000 gon and Tom cast up a limited number of car bodies. I believe he's sold out of these now. 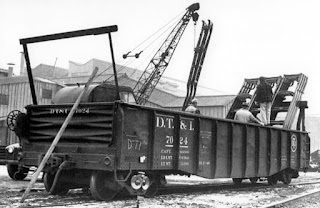 Right now the tedious part is bending all the grabs, 96 in total. Of which 72 are drop grabs. I'm having to bend them because I don't have any 24" grabs here and I don't want to wait for them to be delivered. So it really is my own fault. 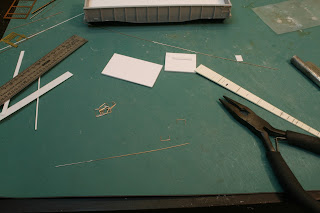 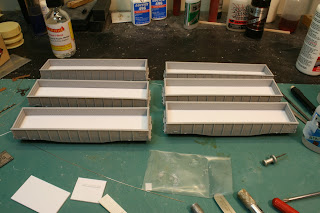 But I'm well versed in the art of wire bending and the radio is good company. It'll be over soon enough.
With any luck I'll be cobbling up the loading frames for the car frames tomorrow.
Stay tuned.

I talked to Ted from speedwitch and he said Tom was making these gons. Any way to get in contact with him to see if they are still available? Would really like a few of them without kit bashing.

Joe,
Tom cast a limited number of these cars and the entire production run has been spoken for. Sorry.
If you're looking for Proto 2000 gons to cut up I have a few here I can sell.

So in your case, not having the right grabs, tedious is spelled T-I-C-H-Y

Do not no if you got my last post. Wish he would cast somemore, would save sometime kit bashing. Oh well. Are the Proto 2000 gons undec? How much and how many?

Wish he would cast some more! AS you know would save sometime kit bashing. Oh well. How many Proto 2000 gons do you want to part with? Undec? and the age old question how much?

Actually, there was enough demand that I started a wait list, made a second mold and am casting more. Contact me at pullmanboss (at) yahoo (dot) com for details.