A day out with Brian

And Trevor too.
Spent yesterday in a rather different milieu. I went to a modest train show in Burlington, Ont to assist my friend Brian Dickey with his British Prototype O scale layout.
Basically, Trevor and spent the day shuffling wagons in and out of the fiddle yard, and switching them into various locations on the display area.
MORE FUN THAN PUPPIES! 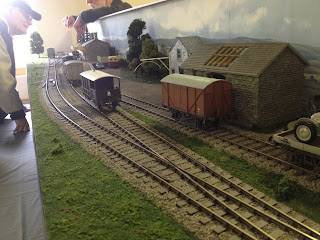 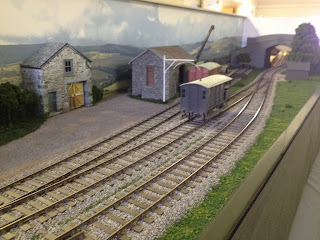 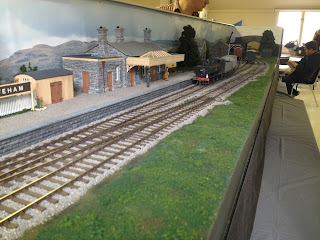 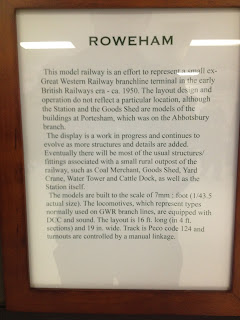 All the locomotives are equipped with factory DCC sound and they run like Swiss watches. Since we're dealing with large scale items, coupling was done with 3 link chains. With a little practice hooking and unhooking became very easy.(Here's a tip) It's way easier to do when you're not laughing.
British prototypes always have an appeal for me. Small locos, and all those short wagons make for really nice looking trains. And those whistles!
I get sorely tempted to toss all that North American stuff and start buying fish vans.

It was a grand day out. Thanks to Brian for allowing us to help out - and to you, Pierre, just because it's always fun.
One of the insights I took away from yesterday's event was how suitable British 7mm is for an exhibition layout. The equipment - tank engines and two-axle rolling stock - occupied roughly the same space as HO equipment for an era that used 50-foot freight cars. And the structures required for a small, end of the line, up-country station area were also quite modest.
At the same time, 7mm has a presence that HO does not. It's great for an exhibition, where punters can get up close to the models and really see what's going on.
If you start buying fish vans, let me know. I'd pick up a 7mm loco to run on your layout.
Cheers!
- Trevor