Room prep.
One of the major selling points of our new abode was the finished basement. Terrazzo floor, fully paneled walls and a drop ceiling. And large open spaces. 13' x 40' for the layout. One can do a lot of damage in that kind of space.
But of course, it's not "perfect". The ceiling tiles are almost 50 years old and showing their age. Pool cues and kids with darts hadn't been kind to the tiles. The lighting fixtures were a good 30 years old as well. T 12 florescent tubes, which are juice hogs compared to today's T 8 fixtures.
So changes are in order.
All the tiles have been removed and the fixtures replaced. It turns out a good move on my part. The fixtures were connected to ceiling boxes with short runs of BX wire. Nothing wrong with that, except the wire inside the BX was aluminum. Aluminum and copper are not supposed to be used together except with special connectors. Fires can result. And I found a couple of scorch marks as I rewired the fixtures.
Removing the tiles turned out to be far more of a job than I had hoped.
The ceiling had been professionally installed when the house was built in 1968. And the installer certainly rose to the occasion. Common practice is to have the T-bars 3" below the lowest obstruction. In my house they didn't even leave 1/2" in some places. 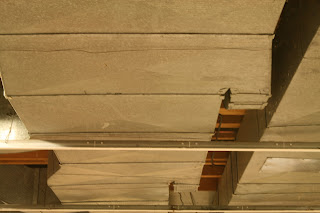 Which left me cursing heavily as I tried to remove the tiles and wondering how they installed the tiles in the first place.
The answer came to me as I got near the north end of the room.
They hung all the primary T-Bars and then added the connectors as they went along with the tiles. It's the only way. So I've had to remove most of the connectors in preparation for replacing the tiles. 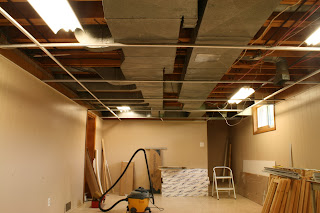 It was a filthy, nasty job but it's done.

Once my back stops spasming I will start in on the new tiles and then we can focus on trains!