So you think you have enough cabooses, do you?

I now know that I don't.
Yesterday I spent a couple of hours with my friend Wes Dengate. A London based retired teacher, whose father was an engineer working out of London back in the steam days. In his youth Wes worked as a brakeman in the summers in St Thomas and his father ran some trains out of St Thomas as well.
Wes is also a railroad buff and an active historian. His collection of photos and data is remarkable. Wes wrote the articles on the Wabash in Ontario for the Wabash Historical Society that inspired me to model the operation in the first place.
Among the things he shared with me was a list of the number of cabooses assigned to the Buffalo Division of the Wabash. That bit that ran in Ontario. 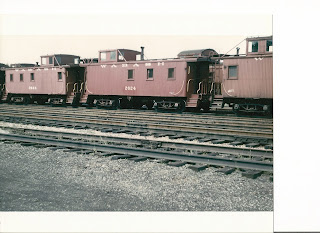 There were 38 Wabash cabooses in Ontario. 30 of which were in pool service.
There were 12 crews assigned to the west end pool. (St Thomas to Windsor)
There were 15 crews assigned to the east end pool. (St Thomas to Fort Erie)
As well as other assignments.
All of this tells me that I don't have enough cabooses. With the planning for the new layout focusing on the St Thomas yard and the crew and caboose swaps, it's clear that I'll be building many more cabooses soon. I've got 8 right now. And I'm thinking that I'll be needing at least 12 more.
I've also realized that the line was far busier than I had first thought, in the time frame that I'm modeling, (1951). The potential is there for 30 trains a day. That's a train every 48 minutes on average.
May not sound like much, but consider that in the mix is a daily mixed train and way freights that need to ply their trade.
It also means that I have to rethink the staging yards. They may need to be a little bigger, and be setup to allow for quick restaging. Keep that freight moving!

Great info! Many thanks to you and Wes.